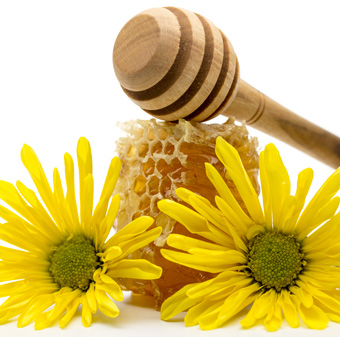 What is royal jelly?

Royal jelly is one of the richest substances found in Nature. As the seasons change, its exceptional content in rare nutrients makes it invaluable for effortlessly overcoming bouts of fatigue and finding new energy.

It is produced from a very sweet, whitish substance secreted by worker bees between their fourth and fifteenth day of life. It is the sole source of nutrition for larvae destined to become queen bees, and for adult queens once they leave the colony.

Royal jelly is considered an exceptional substance because of its rich content in essential nutrients. The jelly is a kind of thick, whitish paste with a faint smell but a hot, acidic taste which makes it particularly difficult to swallow in its fresh, non-lyophilised (non-freeze-dried) form (1).

In particular, it helps to:

What are the exceptional components found in royal jelly?

The chemical compounds found in royal jelly are quite extraordinary, comprising a wide variety of carbohydrates, lipids and proteins. According to the scientific literature, however, it is the fatty acid 10HDA – the content of which varies between 3% and 5% - which is the most active compound.

10%-20% of royal jelly is made up of carbohydrates, the main ones being fructose and glucose, which account for around 90% of total carbohydrates. It is not uncommon to also find galactose, maltose, trehalose, turanose and palatinose (2).

Produced by the bees’ glands, these rare proteins belong to the family of apalbumins (5) and play a role in the function of the bees’ cognitive system. Royal jelly is also the only known source of an anti-microbial protein called royalisin (6).

Last but not least are the jelleins which are composed of 8-9 amino acids.

Royal jelly does not contain large quantities of lipids but those it does contain are of exceptional quality. The most prominent fatty acid is 10-hydroxy-2-decenoic acid (10H2DA), a quite remarkable compound. There is also gluconic acid (24 %), 10HDA (22 %) and various dicarboxylic acids (5 %) (7).

Unlike the majority of animal and plant-source fatty acids, those in royal jelly are short-chain (8-10 carbon atoms), recognized for their beneficial effects on the gut mucosa.

Vitamins and minerals in royal jelly

Royal jelly contains a number of vitamins, particularly all the B group vitamins. It also contains several minerals including potassium, calcium, magnesium, zinc, iron and copper.

Where does royal jelly come from? How is it produced?

Royal jelly is the sole source of nutrition for queen bees and larvae in the first days of life, and is thus particularly rare. Fortunately, a technique has been developed in recent years to make it more accessible.

Producing royal jelly is a painstaking task which requires great patience on the part of the apiarist. A number of fundamental conditions are required:

The royal jelly offered by SuperSmart is freeze-dried and encapsulated using a modern technique which leaves its precious components unchanged. This process results in it losing almost two-thirds of its weight in water: 100mg of freeze-dried jelly is equivalent to around 300mg of fresh jelly.

What are royal jelly’s mechanisms of action?

Royal jelly’s mechanisms of action come from its composition and exceptional diversity. More powerful than honey (8), its antioxidant effects are believed to be comparable to those of vitamins C and E, as a result of its high peptide and free amino acid content (9).

Royal jelly is considered a tonic in traditional Chinese medicine, while in Eastern Europe, it is regarded as an excellent adaptogen (a substance which increases the body’s resistance to stress).

Like honey and propolis, it has been used by humans since antiquity. Multiple traces have been found of associations between humans of the Neolithic age and wild bees (10), long before apiculture was created concurrently by various civilisations, such as the Maya or ancient Rome, around 2400 BC.

Some believe its potential benefits for human health are based on the effects it induces in larvae: it is royal jelly which is responsible for the development of the queen’s reproductive organs and which accelerates her emergence from her cell (15 days for the queen compared with 21 for a worker bee). The exceptional fertility and lifespan enjoyed by the queen bee is thus due to royal jelly.

Can royal jelly be combined with other substances?

Should it be kept in the ‘fridge?

There is no need to refrigerate freeze-dried royal jelly.

Who is likely to benefit from royal jelly?

Everyone can benefit from royal jelly, but it may be particularly useful for sportspeople, pregnant women, the over-40s, delicate individuals and those suffering from fatigue or recurrent illness.

What advantages are offered by this particular supplement?

What is the ideal dose?

A dose of 2-3 capsules a day is recommended as a course of treatment that can be repeated several times a year if required.

It is usually taken before breakfast, for between four and six weeks.

Composition
Directions for use
Adults. Take 2 capsules with breakfast and another with lunch, if required. Each capsule contains 100mg of organic, freeze-dried royal jelly