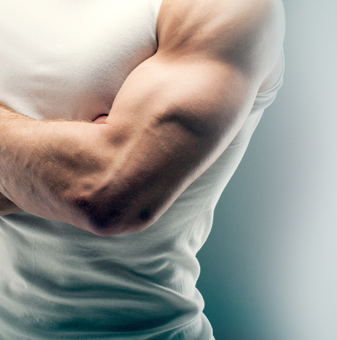 Ibutamoren is an experimental substance which binds to the same receptors as ghrelin, a natural growth hormone secreted by enteroendocrine cells. Because it mimics this hormone so effectively, Ibutamoren is said to be a ghrelin receptor antagonist. Its anabolising, neuro-protective, lipolytic and anti-aging properties are currently attracting significant scientific interest and are the subject of extensive investigation.

In the body, MK-677 binds to ghrelin receptors on the surfaces of cells. This triggers a series of chain reactions including increased secretion of several hormones such as growth hormone (GH) and insulin-like growth factor (IGF-1).

These chain reactions are normally triggered by the action of ghrelin, a peptide hormone primarily released by endocrine cells in the intestines and stomach (1). Ghrelin has various physiological effects such as regulation of appetite (2) and adipose tissue (3), as well as of carbohydrate and energy metabolism (4). Recent studies have also demonstrated its role in cognitive function (5-6).

These potential effects are the result of Ibutamoren’s principal action of directly increasing circulating levels of IGF-1, a peptide hormone responsible for boosting protein synthesis and promoting overall tissue growth.

Clinical trials are continuing in order to identify any potential side effects, with a view to potentially authorising its sale for human consumption. Studies conducted so far have demonstrated slight increases in blood pressure, glycated hemoglobin and appetite (21). They have also shown that were it to be authorized for human consumption, it would be contraindicated for those with a history of congestive heart failure, especially elderly individuals. In any case, monitoring blood parameters would be essential, and it would only be possible to recommend those products with rigorously-controlled purity,

Currently, Ibutamoren is still at the stage of pre-clinical testing. It is therefore available solely for research purposes and is not approved for human consumption.

However, its physiological effects and therapeutic potential mean that certain groups of people may be interested in monitoring developments in its research:

How does it differ from anabolic steroids?

Like MK-677, anabolic steroids produce an increase in muscle mass and physical strength, but that’s where the similarity ends. Anabolic steroids are fatty acids which bind to ‘androgen receptors’ and trigger the expression of a number of target genes. This interaction causes anabolic effects, as well as a number of unintended consequences, such as a significant increase in virilisation (hairiness, growth in vocal cords, increased risk of baldness), a halt in natural production of sex hormones, an increase in LDL cholesterol, a rise in blood pressure and the development of problematic structural changes in heart ventricles. These unwelcome effects are damaging to the bodybuilding enthusiasts and elite athletes who use them.

Scientific studies show that MK-677 does not cause any side-effects. Depending on the results of the latest clinical trials, it could, in the years to come, constitute a safer alternative to anabolic steroids and a more effective one than growth hormone-releasing peptides (GHRPs), the bioavailability and half-life of which remain very low.

Ibutamoren thus appears to be an innovative and credible alternative for stimulating growth hormone secretion. It is already benefiting from sound clinical trials and produces far fewer side-effects than the substances it closely resembles, such as anabolic steroids and GHRPs.

Note: This product is for research purposes only. It is not approved for human consumption.

Composition
Directions for use
For research purposes only. Not approved for human consumption.
No reviews for this product yet