Mucuna Pruriens has a fascinating biochemical profile, containing a multitude of active ingredients. 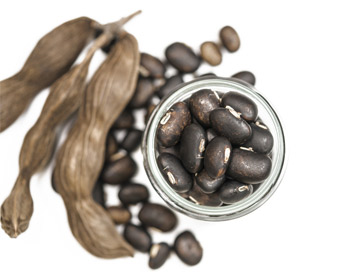 Our Mucuna pruriens supplement contains L-dopa and noradrenalin, which stimulate the production of the growth hormone. Growth hormone is undoubtedly the most powerful anti-aging hormone. It encourages muscle mass and discourages body fat, supports stamina and energy levels, assists in creating a sense of well-being, and has a positive influence on many other aspects of personal health.

What is an L-Dopa supplement?

Mucuna pruriens, otherwise known as Velvet Bean, is a bean that grows on vines in many regions around the world. Velvet bean extract contains a high L-Dopa content, plus it contains other phytochemicals. Mucuna pruriens extract provides a standard L-Dopa serving.

L-Dopa extract is often used to support the nervous system, but additional research is needed to determine all of the Mucuna pruriens benefits and side effects.

What are the benefits of Mucuna pruriens?

Ayurveda is, without doubt, the most ancient system of medicine in the world — and the only traditional medicine to be based on scientific principles.

The use of the herb Mucuna pruriens in ayurvedic medicine dates back more than 4500 years. It has a fascinating biochemical profile, containing a multitude of active ingredients, such as nicotine, serotonin and perhaps most significant, L-dopa (or l-dihydroxyphenylalanine) — the main precursor of the neurotransmitter dopamine, isolated by Indian scientists in 1936.

Mucuna pruriens is used in ayurvedic medicine to:

What are the benefits of Mucuna pruriens found in modern research? Studies have shown velvet beans' benefits may include supporting muscle growth, assisting with infertility (acting as an aphrodisiac), and supporting the nervous system. Let's look at each of these in-depth.

Bodybuilders regularly talk about the connection between Mucuna pruriens and hGH, which is the human growth hormone that is produced by the pituitary gland. It is responsible for helping adolescents mature, but also handles the anabolic muscle growth for athletes. Mucuna pruriens helps circulate hGH, allowing for better recovery while trying to gain more strength and muscle.

A study done on the combination of Chlorophytum borivilianum and Mucuna pruriens for muscles shows a positive boost in serum growth hormone levels. The study shows a possible link between Mucuna pruriens and muscle growth in people training regularly.

Studies show there’s a possibility Mucuna pruriens increases dopamine levels alongside other sexual health benefits. This includes links with testosterone improvements, a rise in FSH and LH levels and improvement for fertility and sperm quality.

Mucuna pruriens dopamine support supplement may assist with feelings of calm, the potential to assist in regulating oxidative stress, and may also act as an antioxidant. These properties support reproductive health and testosterone production. Research also shows that Mucuna pruriens can support calm feelings and mental wellbeing, thereby reactivating the systems of infertile men while improving mood and reducing feelings of stress.

Velvet beans benefits to support brain health have also been reported by taking a Mucuna pruriens supplement. Aside from supporting an increase in testosterone, velvet bean extract or L-dopa is proposed as a neurotransmitter. The reason it may trigger a boost in testosterone, FSH and LH is because of how it works in the brain.

It's possible that L-dopa supports dopamine, thereby assisting cognitive performance while also creating feelings of overall well being that can balance emotions for superior control over moods. Studies with degenerative dopaminergic neurons show Mucuna pruriens may even offer a neuroprotective effect.

Not only may the velvet bean supplement support dopamine production; it's also been linked to serotonin and norepinephrine production in research. Both of these are also needed for emotional balance and overall feelings of well being.

Furthermore, L-dopa benefits may extend into learning and memory. Researchers have found that retention and speed were greatly improved after supplementation in some studies.

What do studies say about Velvet Bean Extract?

In a comparative animal study on nervous system support, in which equal quantities of active principle were used, Mucuna pruriens extract was shown to be two to three times more effective than synthetic l-dopa. When dopamine-producing neurons are affected by degeneration of the nervous system, it results in uncontrollable tremors, muscle stiffness, difficulties in speaking, writing and balance, and slowness of movement. Sub-clinical dopamine deficiency is often found in those suffering from depression and lack of sexual desire.

This suggests it is the biochemical profile of the herb as a whole and not just the active principle, which is responsible for significantly increasing its effectiveness in supporting the nervous system at large. Human studies have also shown neurological benefits for Mucuna pruriens, and unlike synthetic l-dopa, shown excellent tolerance and almost no side effects.

Whether you want to take Mucuna pruriens to support muscle building, encourage feelings of wellness and mental acuity or increase feelings of sexuality alongside fertility support, it's important you perform your own research first. While Mucuna pruriens extract side effects don't appear to be a common occurrence, some situations could put you at a higher risk.

There are not enough studies to determine if L-dopa is safe for pregnant and lactating mothers either. Until more research has been performed, it's best to avoid supplementation during this time, unless otherwise directed by your doctor.

In addition, avoid taking any supplements that have reached their "best by" date. Discard any unused supplements properly and open a new bottle to reduce the chances of side effects.

How Much Mucuna Pruriens To Take

Our Mucuna pruriens capsules contain 400 mg of extract in each. This serving is standardized to contain 15% L-dopa. Our bottle contains 125 capsules.

Generally, we recommend most customers take two to five capsules a day with water and on an empty stomach. If you are taking five capsules each day, the bottle will last you 25 days.

The only other ingredients included in the capsules are acacia gum and rice flour. By avoiding unnecessary fillers and ingredients, customers are subject to fewer side effects.

We recommend starting with the lowest serving possible. You and your medical care provider can decide the optimal and minimal amount to start with. After several weeks of tolerating the supplements well, you might feel that there are benefits to taking more. If you want to increase the serving, up the serving amount in small increments and adjust with the advice of your primary care provider. Once you hit the optimal serving, you can stop adding more.

Keep all supplements out of the reach of children and pets. These capsules are intended only for healthy adults seeking to support overall health and well-being by taking supplements.

Store your mucuna pruriens supplements in a cool and dark location, away from direct sunlight. Ideally, you can keep the capsules in your medicine cabinet to ensure maximum efficacy.

If you need further support for other health concerns, be sure to check out the full lineup of quality supplements from Supersmart. Always seek professional medical advice before adding new supplements into your daily regime and servings.

My sister in law, is taking it for 6 months. She has Parkinson, the Mucuna is working, she is very happy becouse her body is more flexible.

Subscribe to our newsletter
and obtain a 5% permanent discount
Our selection of articles
MIND diet: recipes that help protect the brain

Concentration: the 7 best supplements for the brain