No reviews
Reviews
$23.60$59.00
-60%
Today In Stock
Best if used before 09/30/2022
Description
Carnosine is a peptide with powerful, pluri-potent, proven activity.
Certificate of Analysis 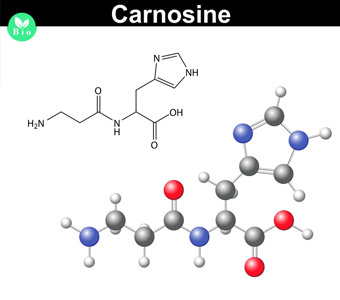 Carnosine, or l-carnosine, is a peptide formed naturally by the body during digestion of protein-rich foods. Abundantly present in muscle and brain tissue, it is primarily involved in the contraction of various muscles and tissues including that of the heart.

What are the benefits associated with Carnosine?

As a result of its antioxidant potency and anti-glycation effect, carnosine is sometimes considered as an anti-aging treatment. It continues to be the subject of numerous studies on its benefits for slowing down the body’s aging process. Scientists are focusing on its potential for delaying aging of the muscles which can manifest in muscle weakness and loss of muscle mass, also known as sarcopenia.

Damage to proteins is one of the key mechanisms of aging. Essential for the body to function properly, proteins are destroyed by either oxidation (free radicals) or glycation (a reaction with glucose molecules). Skin aging is the most visible sign of protein damage, manifesting as wrinkles, loss of elasticity and reduced healing capacity. But the visible changes to the skin also reflect those affecting the whole body - muscles, blood vessels, the eyes, the brain and many other organs. When too many proteins cease to function, the body ages prematurely and becomes the target for degenerative diseases.

What do studies say about Carnosine?

Studies show that the amino acid carnosine is the most effective antioxidant against the hydroxyl radical (proteins' no. 1 enemy) and the most powerful inhibitor of the glycation process which caramelises' proteins through cross-linking. Research also shows that carnosine levels in muscles drops by more than 63% at the age of 70 - which could explain the decline in muscle mass typically seen with advancing age. The reduction in carnosine in the body, associated with increasing oxidative stress and reliance on high-carbohydrate diets, makes supplementation desirable, if not essential. We're cutting its price significantly as we're keen it should not be prohibitively expensive to a wider market. We believe carnosine to be the most important new product to appear in recent times in the field of nutrition:

Some studies have demonstrated significant activity from carnosine at relatively low doses, around 150mg a day. Others show superior activity at higher doses - 1000-1500mg a day - levels at which the enzyme carnosinase (which damages carnosine) becomes saturated, making free carnosine available to the whole body. Other dietary supplements may also be of interest to help boost the protective effects of carnosine. The synergistic formulation AntiOxidant Synergy, for example, provides the antioxidant potency of numerous compounds including curcumin, a much-prized ingredient in Ayurvedic medicine, alpha-lipoic acid, known as the ‘hyper-antioxidant’, and glutathione, a key endogenous antioxidant.

Composition
Each vegetarian capsule contains 500 mg of L-carnosine.
Directions for use
Take two or three capsules a day at mealtimes.
No reviews for this product yet