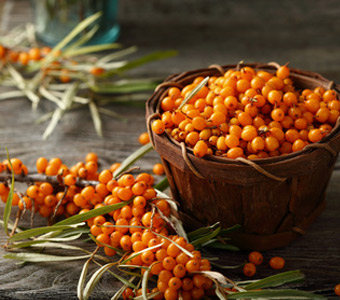 Sea Buckthorn extract offers not only a valuable, inexpensive way of compensating for the lack of essential Omega 7 fatty acids in the diet, but is also a nutricosmetic ingredient much-prized for its significant regenerative properties in all epithelization-associated processes. You can buy this extract of pulp (60%) and seeds (40%) at Supersmart, with all the active principles of the berry, in particular the precious Omega 7 fatty acid, palmitoleic acid (14-22%).

What is Sea Buckthorn?

Sea Buckthorn (argousier) is a thorny bush from the Hippophae rhamnoides family with yellow-orange berries throughout the winter months. Using a non-aggressive, CO2-supercritical extraction process, it is possible to obtain an extract rich in a range of fatty acids - Omega 3 (alpha linolenic acid), Omega 6 (linoleic acid), Omega 9 (oleic acid) and, in particular, Omega 7 (palmitoleic acid), a much rarer fatty acid of which Sea Buckthorn is the richest source. The extract also provides a number of important unsaponifiables: carotenoids, tocopherols, tocotrienols and phytosterols, as well as several flavonoids and vitamin C.

Sea Buckthorn oil, used in Chinese and Tibetan medicine for its soothing effects on digestive and urogenital disorders, is particularly rich in palmitoleic and cis-vaccinic acids, both Omega 7 fatty acids. Scientists believe that certain tissues such as the skin and mucous membranes, lining the digestive and urogenital systems, have a particular affinity for Omega 7 fatty acids, which have almost disappeared from modern diets.

What are the benefits associated with Sea Buckthorn Extract?

The Omega 7 fatty acids in Sea Buckthorn act in a complementary, remedy and relief capacity and have protective, restorative, hydrating and rejuvenating effects:

Clinical studies, notably from Finland, have confirmed the benefits of Omega 7 fatty acids to the skin and mucous membranes. They hold back the appearance of aging skin by hydrating the skin, improving its softness and elasticity and reducing the number and depth of wrinkles.

Buy Sea Buckthorn Extract to improve the health of skin and mucous membranes.

Composition
Directions for use
Adults. Take 2 softgels a day with meals.
Each softgel contains 500 mg argousier oil.
No reviews for this product yet

Subscribe to our newsletter
and obtain a 5% permanent discount
Our selection of articles
How can you increase your collagen production naturally?

What are the 5 best supplements for our hair?

A perfect, glossy mane is not the sole preserve of models in conditioner adverts. In this article, you’ll find 5 dietary supplements that can help your hair shine like never before

Grey hair: the natural products that can help prevent it

Though it might be trendy among young people, for many in their thirties and forties, grey hair is definitely to be avoided. What makes hair turn grey? What natural solutions are there? Read on for the answers.