Everything you need to know about Boswellia serrata resin: its history, origins, properties, benefits, methods of use and scientific opinion …
Contents
Rédaction Supersmart.
2018-05-18 (blog.publication: 2018-05-08)Commentaires (0)

What is Boswellia serrata?

Before we move on to explore the benefits of Boswellia serrata, a brief description is called for. It is a moderate-sized tree belonging to the Burseraceae family, recognisable by its large offshoots, deciduous leaves and small yellowish-white flowers. It grows in India’s dry, mountainous regions. Boswellia serrata occupies a prominent place in traditional medicine and with good cause, as it produces an aromatic oleoresin that has been used medicinally for centuries. Indian frankincense, boswellia, salai, salai guggul … the names given to Boswellia serrata are almost as numerous as its traditional applications.

What are its traditional uses and virtues?

Boswellia resin has been used in a variety of ways over the centuries. It was burned during religious ceremonies to encourage meditation and create an atmosphere conducive to prayer. It is also one of the natural remedies of the celebrated Ayurvedic medicine. This traditional system of medicine is based on a holistic approach which goes beyond the body to consider the mind, lifestyle and environment of the patient. In Ayurveda texts, Boswellia serrata resin is recommended for treating a number of health issues: joint pain, digestive problems, respiratory disorders, skin complaints … It is also used in traditional Chinese medicine to relieve rheumatic and menstrual pain.

What is boswellia resin composed of?

What are the properties of Boswellia serrata?

The therapeutic virtues of Boswellia serrata have been confirmed by several studies and are attributed to the activity of boswellic acids, particularly that of AKBA (acetyl-11-keto-β-boswellic acid). Though by no means exhaustive, the following paragraphs outline the main properties of boswellia.

Anti-inflammatory activity. As mentioned, boswellic acids are potent natural anti-inflammatories. They inhibit the synthesis, release and activation of certain inflammatory mediators including several interleukins (IL-1, IL-2, IL-4, IL-6), NF-κB, leukotrienes and 5-lipoxygenase (5-LOX). AKBA is particularly effective at inhibiting the pro-inflammatory activity of the enzyme 5-lipoxygenase which is why powerful anti-inflammatory dietary supplements based on boswellia are now available. For example, the product 5-Loxin® formulated from an extract of Boswellia serrata standardised to 30% AKBA, is recommended for relieving inflammation-induced joint pain, particularly that of osteoarthritis and rheumatoid arthritis.

Immune-modulatory potential. In addition to their natural anti-inflammatory action, boswellic acids may also have an effect on the immune system. Some studies suggest that the active principles in Boswellia serrata resin could offer benefits by acting on the body’s defense mechanisms, influencing in particular the production of antibodies and the proliferation of lymphocytes. In this way, boswellia resin may help protect the body and prevent the development of certain diseases.

Anti-depressant potential. Recent research also suggests that plants from the Boswellia genus have an anxiolytic effect which could help those suffering from anxiety and depression. The results of further studies are awaited which may expand on the link between boswellia and depression.

What are the benefits of Boswellia serrata?

Such are the properties of Boswellia serrata that it offers numerous benefits for our health and well-being. The activity of AKBA may be particularly effective for protecting against and combatting inflammatory symptoms. Though not exhaustive, the following section outlines boswellia’s main benefits.

Joint pain. For some years now, supplementing with boswellia has proved to be particularly popular for relieving inflammation-induced joint pain. Several studies have shown that the anti-inflammatory activity of AKBA and other boswellic acids helps reduce the pain of osteoarthritis and rheumatoid arthritis. According to research, optimal efficacy can be achieved by combining boswellic acids with other active principles beneficial for joint health. For example, the nutritional supplement Flexi-Smart combines a boswellia extract standardised to 20% AKBA, with hyaluronic acid and an extract of avocado and soya unsaponifiables. This combination of active principles helps to not only relieve joint pain but also inhibit cartilage breakdown.

Asthma. Boswellia supplementation could also have benefits for those suffering from asthma. Essentially chronic inflammation of the airways, asthma is often a very restricting condition but according to several studies on the subject, it can be relieved with the use of boswellia-based supplements. Researchers have shown that the boswellic acids present in boswellia resin may help minimise certain asthma symptoms such as ‘rhonchi’, the rattling respiratory sounds that characterise asthma attacks. Boswellic acids are thought to have an effect on leukotrienes, substances present in the bronchi of asthmatic individuals. Nowadays, there is a wide range of anti-leukotriene drugs for treating asthma; Boswellia serrata resin could be seen as a natural anti-leukotriene remedy.

Respiratory disorders. Having observed boswellia’s benefits for asthma, scientists were also keen to discover its potential for treating other respiratory disorders. In evaluating the effects of boswellia supplementation in patients with chronic obstructive pulmonary disease (COPD), they noted an improvement in their symptoms, a finding which could pave the way for promising new treatments.

Skin problems. In traditional Asian medicine, boswellia resin is recommended for treating various skin problems. Studies conducted on the subject show that boswellic acids may have therapeutic virtues for combatting a number of inflammatory skin conditions such as psoriasis and acne.

Cancer. Scientists have recently speculated that boswellia resin might have anti-cancer potential. They believe that the anti-inflammatory activity of boswellic acids could help fight the development of cancer cells. The results of further studies are awaited in the coming years!

Anxiety and dépression. Evidence is also awaited of the potential of Boswellia serrata for combatting depression and anxiety problems. Suffice to say we can expect to hear a lot more about this tree’s resin in the years to come!

How can you obtain the benefits of Boswellia serrata?

As a result of its properties and benefits, Boswellia serrata resin has become increasingly popular over recent years. So where can it be found ? How can you take advantage of its benefits? Before we answer these questions, a quick mention of how the resin is extracted. When an incision is made in the trunk, an oleoresin is exuded which is then purified to produce an essential oil of Boswellia serrata and the valuable resin rich in boswellic acids. It’s worth noting, however, that not all resins offer the same content of active principles, which is why SuperSmart has chosen to use only extracts of boswellia standardised in boswellic acids. For example, our anti-inflammatory Super Boswellia supplement is formulated from an extract standardised to 20% AKBA, delivering the full benefits of this natural anti-inflammatory!

How do you choose the right dose??

A number of studies have looked at the dosage and efficacy of boswellia supplements. These show that the dose generally varies between 900mg and 1200mg a day though it depends primarily on an individual’s needs and state of health. If in doubt, it is best to seek advice from a therapist. It’s also important to know that different boswellia supplements may have different doses as it depends on the particular boswellia extract used in the product. It can also vary if the Boswellia serrata is combined with other natural extracts.

What synergies are possible?

A number of scientists have investigated possible synergies in order to maximise the efficacy of boswellia supplements. In particular, excellent results have been obtained when Boswellia serrata resin is combined with extracts of Curcuma longa. More than just a culinary spice, curcuma is an active ingredient recognized in phytotherapy for its multiple benefits for health and well-being. The rhizomes of Curcuma longaNatural Curcuma which is formulated from an extract standardised to 95% curcuminoids.

In the majority of cases, Boswellia serrata supplements are well-tolerated by the body . However, as with any active principle, there can be certain contraindications associated with boswellic acids. As a precautionary measure, boswellia supplementation is not recommended for women who are pregnant or breastfeeding, or for children. In addition, medical advice should be sought by those on medication before starting supplementation as interactions may occur between boswellic acids and certain active principles in drugs. In terms of side-effects, only rare cases of skin reactions and digestive problems have been reported from taking Boswellia serrata supplements. To prevent any side-effects, it is essential to both adhere to the suggested dose, and make sure you choose a high quality supplement.

You must be connected to your account to leave a comment
Be the first to review this article
Our selection of articles
Migraine: a summary in 7 questions

Even if the supposed aphrodisiac effects of ginger have yet to be scientifically proven, this Asian spice nonetheless offers a surprising number of health benefits, as demonstrated in close to 100 clinical trials. 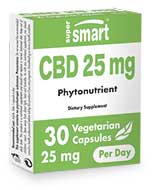