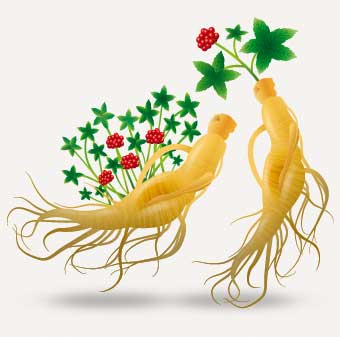 Panax notoginseng is a variety of the famous ginseng, regarded as a source of ‘vital energy’ and known for increasing strength and blood flow. Though they sound similar, notoginseng is distinct from classic ginseng. Its exceptional properties have led to the launch of a number of major nutritional supplements.

Notoginseng is part of the Araliaceae family native to China’s Guangxi and Yunnan provinces where it occupies a special place in traditional Chinese medicine: its benefits manifest primarily in the liver and stomach meridians. It is used for treating problems related to circulation, bleeding (internal and external haemorrhage), haematomas and coagulation problems (improving blood flow).

It often features in first aid kits for healing wounds: when applied as a poultice to the affected area, it can relieve pain and stem bleeding. It is also one of the ingredients in Zheng Gu Shui, a recognised preparation in the Chinese pharmacopoeia, used for improving the circulation, boosting energy, reducing inflammation, relieving pain, accelerating healing and helping to regenerate damaged tissue.

What are the properties of Notoginseng?

Historical use of notoginseng has provided empirical evidence of its virtues, but today, its effects can be explained scientifically. They are related to its high content in a specific fatty acid called trilinolein, and in particular, to its ginsenosides and notoginsenosides.

These are saponins unique to the ginseng species. There are several types: ginsenosides Rb1, Rg1, Rd, Re and Rb2. Research has yet to uncover all their secrets but they are thought to act in two ways: by altering cell membrane properties and by potentially binding to steroid hormone receptors.

Whichever is the case, scientists have already demonstrated their effects on the cardiovascular, immune and nervous systems (showing remarkable benefits for cognitive decline). Over the last few years, researchers have also observed anti-proliferative, neuroprotective and antioxidant properties.

When should you consider supplementing with ginseng?

While notoginseng has many benefits, some deserve special attention. Notoginseng can thus be effective in the following cases:

What do studies say about Notoginseng?

Over the last 20 years, science has also focused on notoginseng’s anti-ischaemia, anti-infarction and lipid-lowering properties. These remarkable effects have given rise to a number of studies and pharmacological trials investigating different areas:

What dose is required to obtain the benefits of notoginseng?

Why choose a notoginseng concentrate over a conventional extract? There are three main reasons:

This all shows the tremendous opportunity provided by this extract of Panax notoginseng to benefit from the effects of notoginsenosides. It is obtained from the root and leaf and contains 200mg of extract of Panax notoginseng. Chinese pharmacological studies have shown this dose to be sufficient for all the above-mentioned applications. In terms of its form, studies show that capsules (taken 2-3 times a day) are the most reliable, though it is also possible to use it topically in paste or powder form (to heal wounds).

In short, notoginseng is an invigorating supplement which, with its range of applications and multiple benefits, constitutes a vitally important product. It can be compared primarily with «Triple Protect», a supplement aimed at fighting hypertension and circulation problems, PADMA Basic, mainly recommended for peripheral circulation problems such as numbness, and Cardio Booster, the ‘king’ of the cardiac protectors.

Co-enzyme Q10 or Ubiquinol: which is best for reducing the risk of a cardiovascular event?

Which is more effective – coenzyme Q10 or ubiquinol?