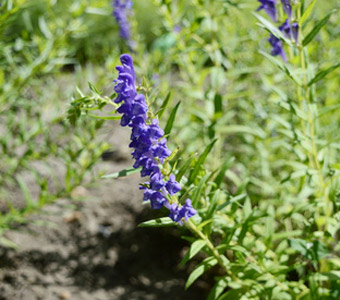 A baicalin supplement is a polyphenolic compound and flavone, part of the large family of flavonoids. Isolated from various species of the plant scutellaria, it has historically been used in Chinese herbal medicine — where it is known as Huang-chin (Scutellaria baicalensis) — either on its own, or combined with other herbs such as in Sho-Saiko-Ti, a well-known liver cleanser.

So, what is baicalin? Also known as Chinese skullcap, baicalin is the subject of greater scientific interest for its ability to inhibit prolyl endopeptidase and for its effects on GABA receptors, which explains its various areas of activity and potential uses. There are three main Chinese skullcap benefits.

Its calming, relaxing, and rebalancing properties are comparable with those of L-theanine. In fact, at precise doses, baicalin can be taken in conjunction with these substances. Research shows baicalin has a positive effect on all sleep-related problems and is a good alternative to today’s over-prescribed sleeping tablets and benzodiazepines. It has anxiolytic properties but without inducing a sedative effect.

It can be used in isolation, where its activity is similar to that of GABA, or Pharma GABA, but in those with long-term insomnia, it can also be combined with low-dose melatonin or magnolia extract, with which it shares certain antioxidant properties.

Studies indicate baicalin has an anti-inflammatory effect on joints, and supplementation may help relieve inflamed joints, such as the hips and knees.

Baicalin supplements can also help reduce inflammation in bronchial complaints, as well as allergies that affect the sinuses, which promotes easier deeper breathing.

Inhibits the Effects of Aging

Studies show baicalin delays certain processes associated with aging through its effects on cellular energy. We know that a cell divides approximately five times before dying and that, as recent studies show, this cell death is linked to telomere length. If a cell does not receive nutritional or other elements, it will enter a state of senescence before dying via apoptosis (programmed cell-death). Because of this, we can see how in older people, internal organ function declines due to inadequate energy supply.

Baicalin has shown potential in inhibiting such processes, and therefore extending the life of various vital organs. A number of treatment protocols have been established by doctors and physiotherapists to ensure the maximum benefits from these properties.

In addition to those skullcap supplement benefits, you may experience the following:

Now that you understand all the advantages of a high-quality Scutellaria baicalensis supplement, you can see there are many baicalin uses that may apply to you. Consider buying baicalin to use as a sleep aid, an anti-inflammatory, and even for skin health.

How To Take Baicalin Capsules

There are no major side effects associated with taking a Scutellaria baicalin supplement. However, it’s always recommended to do your own research before starting any new supplement regimen.

In addition, you may want to adjust your baicalin antioxidant intake if you drink teas that contain skullcap. These are sometimes blended with other herbs, such as lemon balm. Because skullcap teas are less concentrated than supplements, it’s difficult to get enough through drinking them alone.

You may also use a tincture that contains skullcap, especially if you are looking to consume baicalin for skin conditions. When you add a tincture to your regimen, make sure you adjust the intake of your supplement to account for the concentration and ingredients of the topical formula you are taking.

It helps quite a bit w/ my COPD. Breathing easier.
References