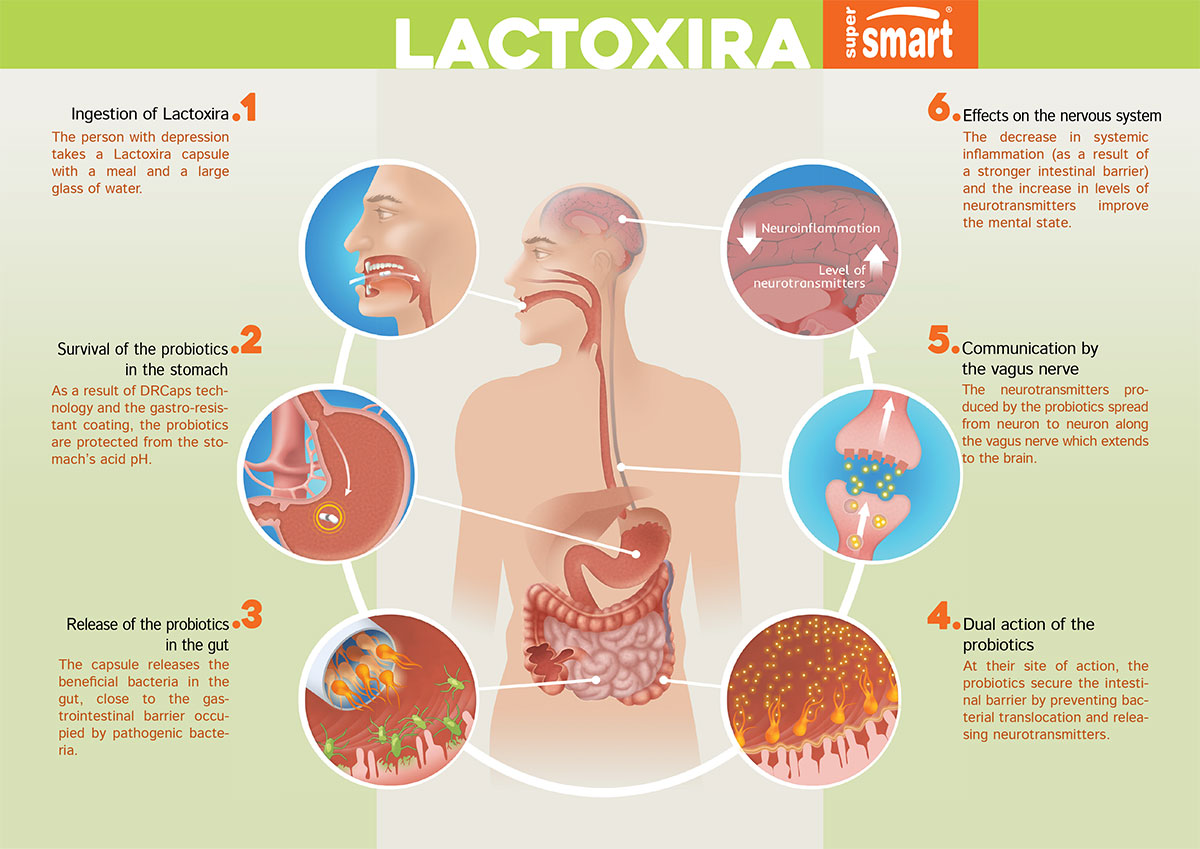 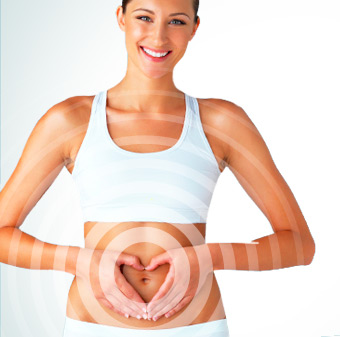 The formulation of Lactoxira draws on the very latest advances in neurobiology: we now know that the microorganisms that populate our digestive tract communicate with the brain (via neurotransmitter synthesis and the indirect release of cell-signaling substances) and that they influence our mood, thoughts and behavior. This major discovery is revolutionising the way we treat those suffering from low mood, depression, and mood disorders who generally have a highly compromised microbiome.

Who is Lactoxira aimed at?

The probiotic formulation Lactoxira is aimed at anyone prone to problems with mood and motivation:

Lactoxira is also for anyone with a lifestyle that doesn’t support a healthy mental state (smoking, stress, excess alcohol consumption, lack of physical activity, lack of sleep, antibiotic treatment, nutritional deficiencies, particularly in vitamins D, B6, B12 and B9, aging …), now available to buy at Supersmart.

What are Lactoxira’s effects on mood and psychological state?

Probiotics are living microorganisms that can have a positive effect on our gut flora (1). They are associated with numerous improvements to health (relating to gastrointestinal problems (2), particularly irritable bowel syndrome (3-4), as well as to their ability to lower blood pressure (5) and reduce the risk of eczema (6)), but it seems their therapeutic potential offers even greater promise.

Over the last few years, a number of studies have revealed the huge potential of probiotics for improving mood disorders and fighting depression (7). Scientists now understand that depressive disorders are in fact psycho-neuro-immunological disorders and that probiotic treatment can bring improvements. Two mechanisms of action have been discovered:

Constant, two-way communication with the brain

This is one of the most striking discoveries of recent years: bacteria in the gut are able to communicate with the brain via the vagus nerve (referred to as the microbiome-gut-brain axis (8)). Even more amazingly, they can produce neurotransmitters identical to those found in the brain (9). Several strains of Lactobacilli and Bifidobacteria secrete the inhibitory neurotransmitter GABA (10), production of which is significantly reduced in people with depression and anxiety (11). Other species of bacteria produce acetylcholine (a neurotransmitter involved in memory, concentration and mood (12)) and serotonin (a tryptophan metabolite involved in regulating mood (13)).

These discoveries explain why gut flora is now considered to be a virtual endocrine organ, capable of influencing the central nervous system through the microbiome-gut-brain axis (14-15). Studies have shown that the use of probiotics increases levels of certain neurotransmitters in the frontal cortex, thus reducing symptoms of depression (16).

The second mechanism of action of psychobiotics is based on their ability to reduce levels of inflammation. Scientists had observed that depressed individuals had a number of abnormally high inflammatory markers (17-19), but they had not made the link with their gut flora. We now know that probiotics act against inflammation by impeding the growth of pathogenic bacteria in the small intestine, strengthening the intestinal barrier, reducing bacterial translocation and decreasing the number of inflammatory cytokines and toxins circulating in the body.

Probiotics thus improve mood disorders as a result of their multiple effects against inflammation (2-23). These psychological benefits have indeed been confirmed by two randomised, controlled clinical trials (24-25).

What is Lactoxira comprised of?

The formulation Lactoxira contains the most widely studied probiotic strains in relation to mental health and mood disorders. It is based on the latest meta-analysis which reviewed 25 animal studies and 15 clinical trials (26):

Some of these strains are able to withstand stomach acids (if they weren’t, there would be no benefit to eating yogurts or drinking kefir), but to maximise their chances of survival and ensure the formulation is as effective as possible, the delivery method chosen by Supersmart is gastro-resistant capsules which release the probiotics at the site where they need to act – the gut. The number of living microorganisms that arrive there intact determines their impact. This is also why each dose of Lactoxira contains more than 100 billion bacteria (CFU).

To enhance its efficacy still further, prebiotics have been added to the Lactoxira formulation. These natural compounds, which are indigestible by humans, support the growth of probiotics and make it easier for them to colonise the digestive system.

There are many reasons for taking probiotics to improve psychological health, but if we limit ourselves to five, they are as follows:

How did scientists identify this new property?

It had been suspected for decades that microbiota played an important role in determining mood (as far back as 1863, Ludwig Andreas Feuerback was asserting that ‘we are what we eat’), but it had not been proven scientifically.

In studies conducted on laboratory animals, scientists first succeeded in modifying the behavior of selected species by adding probiotics to their food: they observed that certain types of probiotic made the animals more aggressive while others had soothing effects. These early findings encouraged researchers to test their theories in humans suffering from anxiety, depression or the effects of chronic stress – with convincing results. Thus after several clinical trials, it was possible to isolate all the strains shown to be most active in this area, so that they could be combined in a cutting-edge probiotic formulation.

How can you make Lactoxira even more effective?

If you want to maximise the effects of Lactoxira, here are some measures to adopt alongside your supplementation.

1) Improve your diet throughout the supplementation period (28). The main thing is to gradually increase your intake of dietary fibre: the higher it is, the lower the risk of depression (29). Dietary fibre is only digestible by beneficial bacteria: consuming more of it therefore gives them an advantage over pathogenic organisms. It’s found in almost all fresh fruits and vegetables as well as in whole grains.

Finally, it’s important to increase your intake of B group vitamins (especially folic acid). Vitamin B deficiency is common in those with depression (33-35). These nutrients play an important role in the synthesis of neurotransmitters which influence mood (particularly serotonin).

2) Adopt a healthier lifestyle during the supplementation period. Take the opportunity to go to bed earlier to improve the quality of your sleep. It’s also a good moment to undertake new projects, reach out to loved ones and acknowledge your fears.

3) Discover the benefits of massage. Several studies (36-37) have shown that massage helps improve mood and sleep by releasing additional serotonin.

4) Significantly increase your level of physical activity. Being active is vital for mental well-being. The metabolic changes it induces enhance brain function, and particularly mood (38-39). To feel the benefits, you need to be physically active for around 30 minutes a day, five days a week. If you’re already managing to do this, you could increase the intensity or duration of your activities.

Lactoxira can also be combined with other dietary supplements such as SAM-e, a natural molecule that plays a key role in metabolising neurotransmitters, or St. John’s Wort, as long you use it in a well-controlled manner (it’s a plant that interacts with many drugs and substances).

Drawing on the very latest scientific research, Lactoxira provides the means to do what would have previously been unthinkable: improve an individual’s psychological state by improving their microbiota composition and optimising their gut-brain communication.

I have been using this for years. I like the strains. They help keep my digestion on track. I can’t say if they help reduce my anxiety. I haven’t noticed an obvious difference since using them.
References

Subscribe to our newsletter
and obtain a 5% permanent discount
Our selection of articles
Modifying the gut microbiome to treat autism?

In a recent study, researchers transferred the microbiota of non-autistic children to 18 autistic children. What were the results? What do they tell us about the gut-brain axis?