Xanthohumol is an extract of hop flowers with unique chemopreventive properties. 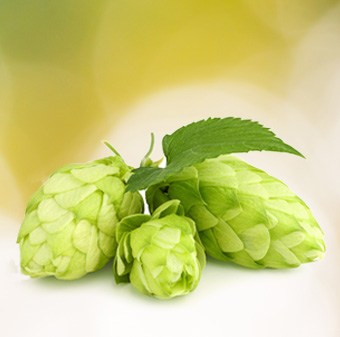 Xanthohumol is a hop flower supplement containing an exceptional antioxidant flavonoid. The xanthohumol supplement is a phenolic compound that's 200 times more powerful than the resveratrol in red wine and offers truly exceptional cell-boosting properties. Beer is the only dietary source of xanthohumol, though the levels it contains are very low, which causes people to look closer at xanthohumol uses and how to get it. So, what does xanthohumol do and where does it come from?

Wine-lovers appreciate the drink's subtlety and sophistication but they also know it's an exceptionally rich source of antioxidants, one of which is the most studied anti-aging substance ever: resveratrol.

However, new research shows that beer is more than a match for its great rival.

Beer is the only dietary source of xanthohumol, a natural cytoprotective antioxidant that's 200 times more powerful than the resveratrol in red wine.

It was Hildegarde de Bingen, a 12th-century Benedictine nun and pharmacologist, who was responsible for introducing hops into beer. Before that, monks had used mainly coriander, gentian or sage to flavor and preserve their precious nectar, which was given to pilgrims in monasteries and abbeys.

It was immediately evident that the hop offered many benefits: with its preservative properties and positive effects, it quickly became an essential ingredient in the recipe. Over the centuries that followed, it would go on to be used by generations of brewers, right up to the present day.

Though the monks had no way of knowing it, its meteoric rise was due to the hop's high content in phenolic compounds, particularly xanthohumol. The problem is that these compounds, which come from the hop flower, are very delicate and tend to make the beer a bit cloudy.

That’s why the majority of modern, large-scale beer producers use a chemical (PVPP) to eliminate this cloudiness and prevent deposits from forming in the bottle. So in order to obtain the benefits of xanthohumol, you need to drink beers with a strong hop content, like an India Pale Ale (IPA).

But the best way of benefiting from this cytoprotective compound is to take a hop flower supplement, standardized in xanthohumol, every day. It's an ultra-modern solution (extracting the xanthohumol from the hop inflorescences is a major technological achievement) that draws on its ancient tradition of use and avoids the oxidative effects of alcohol.

What is xanthohumol used for? Hop flower extract standardized in xanthohumol offers four main benefits, all of which are backed up by scientific literature.

Here are some xanthohumol extract benefits to consider:

Other studies have demonstrated its ability to regulate fat metabolism (by improving lipid parameters) and to boost the body's defenses and vitality. By no means exhaustive, this list identifies xanthohumol as a substance of major interest in terms of protection and contributing to factors affecting recovery.

Where does xanthohumol come from?

Xanthohumol is extracted from the female cones of the hop plant, a climbing perennial which is added to beer to improve its taste, aroma, bitterness, frothy texture and preservation.

It's a chalcone-type antioxidant flavonoid, the only one of its kind, which is found solely in hop flowers. It's, therefore, present in beer but in tiny amounts. Due to the high temperatures used in the brewing process, it gets converted into another less powerful compound called isoxanthohumol.

Some very hoppy beers (such as IPAs) contain more, as hops are added after brewing.

The hop has been regarded as a medicinal plant for centuries. Its use dates back to the monasteries of 8th century Europe when it was used for its pharmacological properties, in particular for treating anxiety and sleep problems, as well as its benefits for the endocrine system.

What are Xanthohumol's mechanisms of action?

The xanthohumol supplement's mechanisms of action come from its extraordinarily high content of phenolic compounds. Recent studies show that regular consumption of these compounds can, in the long term, reduce the risk of many chronic health disorders, such as cardiovascular disease.

Phenols, particularly xanthohumol, exert modulatory effects in cells by interacting with a wide range of molecular targets of signaling pathways (mitogen-activated protein kinase, protein kinase C, detoxifying antioxidant enzymes, etc.). These effects translate into an increased expression of certain cytoprotective genes, regulation of the normal cell cycle, inhibition of growth, an increase in apoptosis, inhibition of angiogenesis, as well as suppression of oxidative stress, a state of imbalance which impairs the structural and functional integrity of cell membranes. The role played by oxidative stress in the development of chronic diseases is now widely documented in scientific literature.

Following ingestion, phenolic compounds, such as xanthohumol, are absorbed, distributed to various tissues and then metabolized by the liver. A proportion undergoes partial conversion by gut flora.

Are there any xanthohumol extract side effects?

It's a popular option for short-term medicinal use with most consumers.

However, there are a few xanthohumol side effects to be aware of.

First, hops can cause dizziness in some people. Additionally, women taking this supplement might notice some changes to their menstrual cycle.

It’s yet to be determined if taking a xanthohumol extract supplement is safe for pregnant women or those who are breastfeeding. To stay on the safe side, it's best to avoid during these times.

Additionally, there are some chemicals in hops that act like estrogen, which can affect people with hormone sensitivities. You shouldn’t take this supplement if you have endometriosis or breast cancer.

Xanthohumol can also cause sleepiness, especially when combined with certain medications and anesthesia during or after surgical procedures. You should stop taking xanthohumol supplements at least two weeks prior to any scheduled surgery.

We recommend adults take two to three of our xanthohumol capsules a day. If you want to boost its effects on sleep, it's worth knowing that hops act synergistically with other supplements available to buy at Supersmart, such as valerian, found in the natural formulation Advanced Sleep Formula. For improving hormone balance, it's better to combine xanthohumol supplements with an extract of pumpkin seeds.

Free radicals: unstable molecules that seek to bind to other atoms and cause chain reactions.

Procarcinogen: carcinogen precursor that can provoke, aggravate or sensitize cancer or its onset.