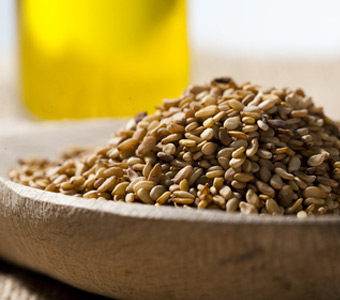 SesaPlex™ is an extract of sesame seeds (Sesamum indicum), concentrated in active ingredients: 30% sesamin and 10% sesamolin. These substances are part of the lignan group of phenolic compounds which have a wide variety of sources and properties. In some plant species, these phytonutrients:

What are the benefits associated with SesaPlex™?

The sesamin and sesamolin in SesaPlex™ contribute to healthy cardiovascular function in a number of ways:

In animal studies, administering SesaPlex™ standardised in sesamin for five weeks resulted in a significant drop in blood pressure. In fact, animals given sesamin had lower levels of superoxide (a marker for cardiovascular stress) as well as lower blood pressure. Scientists concluded that the sesamin inhibited production of aortic superoxide and that its antioxidant activity may contribute to its ability to reduce blood pressure. This hypotensive benefit may also be linked to a blocking effect on calcium channels, similar to that of nifedipine, inducing relaxation of the vascular endothelium.

SesaPlex™ increases levels of gamma- and alpha-tocopherol (vitamin E) in tissues and serum, resulting in a significant decrease in lipid peroxidation and thus preventing damage by excess free radicals. Sesame seed's components, including sesamin and sesamolin, may therefore reduce the effects of reactive oxygen species, a group of highly-reactive and harmful free radicals generated in response to injury such as that caused by a stroke.

A placebo-controlled crossover study was conducted on 24 menopausal women, in which they were either given 50g/day of sesame seed powder for five weeks, followed by a three-week washout period and a further five week placebo period, or the same treatment in reverse order. The sesame treatment was found to significantly improve the women's lipid profile and antioxidant status, particularly their blood tocopherol levels, and may also influence sex hormones. Taking SesaPlex™ could also contribute to weight loss because it improves oxidation of fatty acids in liver tissue and controls glycaemia (blood sugar levels). This supplement can therefore be taken alongside fish oils and conjugated linoleic acid (CLA), a fatty acid widely-shown to aid weight loss.

Chinese scientists showed that significantly less cell death occurred in cells treated with sesamin and sesamolin than in untreated cells. They concluded that the lignans in sesame seeds may suppress production of reactive oxygen species and inhibit the release of mitogen activated-protein kinases, a family of immune system proteins responsible for inducing programd cell death or apoptosis. These observations were corroborated by researchers in Taiwan who found that sesame lignans were able to influence apoptosis by modulating immune system signaling pathways.

Composition
Directions for use
Adults. Take one capsule a day.
Contains sesame.

Subscribe to our newsletter
and obtain a 5% permanent discount
Our selection of articles
Why is it best to take red yeast rice in the evening?

We have prepared this list of the ten best foods for regulating, preventing, and reducing bad cholesterol. Include these foods in your menus as regularly as possible.