No reviews
Reviews
$27.00
New
Limited quantity
Description
Curcumin Solution is the most bioavailable form of curcumin on the market (185 times more bioavailable than standard curcumin).
Certificate of Analysis 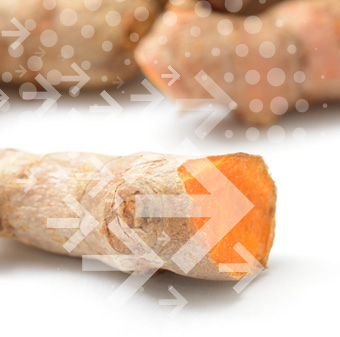 Curcumin Solution is a high-tech formulation containing curcumin, the most biologically active ingredient in turmeric. It has been developed to maximise curcumin absorption and to enable its potential to be fully exploited.

Numerous studies have demonstrated curcumin’s exceptional properties, particularly in relation to inflammation and mutations that cause cell proliferation, now available to buy at Supersmart.

Who is Curcumin Solution aimed at?

With its wide-ranging properties [anti-inflammatory (2-4), antioxidant (5), immune-modulating (6), pro-apoptotic (7) and anti-angiogenic (8-9)], Curcumin Solution is designed for anyone who wants to improve their daily life and optimise their health.

It is particularly recommended for:

How does Curcumin Solution differ from other curcumin supplements?

Curcumin is an exceptional natural molecule, but its efficacy depends on the amount absorbed by the body. Absorption is normally very low due to its instability in acid conditions, poor solubility in digestive fluids and difficulty crossing the intestinal wall (10-12).

The advantage offered by Curcumin Solution is that it significantly increases this absorption by micronizing the curcumin and making it soluble in digestive fluids using micelles (microscopic beads that mix easily in water). This is a highly ingenious process: it increases curcumin’s ability to cross the intestinal wall by a factor of 185 compared with standard curcumin. This huge increase in absorption raises the amount of curcumin circulating in, and retained by, the body (curcumin’s half-life is normally very short). By way of comparison, all other strategies employed to increase its absorption are less effective: with the addition of piperine, for example, its absorption is only multiplied 20-30 times (13-14), while incorporating curcumin into lecithin liposomes barely increases it by a factor of four.

An independent study has demonstrated that this is indeed the most bioavailable curcumin supplement on the market (15). Taking two capsules of Curcumin Solution a day results in 10-15 grams of curcumin circulating in the body, whereas it would take more than 25 capsules a day (containing 600mg of standard curcumin) to have any chance of reaching these levels. As a consequence, it’s possible to take fewer capsules and spend less money and still achieve an unparalleled level of circulating curcumin.

How does curcumin act in the body?

Curcumin is the most biologically active compound in the rhizome of Curcuma longa. It has an impressive number of biological benefits and acts against multiple cellular targets involved in cancer (16), diabetes (17), cardiovascular problems (18-20), neurodegenerative diseases (21), rheumatism (22), etc. Its effects on inflammation and elevated blood lipids have been demonstrated in several animal and human studies (23-25). In particular, it inhibits cholesterol production by the liver (26) and reduces the absorption of dietary cholesterol (27-29).

But the property which most interests' researchers is curcumin’s ability to inhibit the proliferation of cancer cells. It does so by intervening at various points in their development and by stimulating the production of enzymes that facilitate their elimination (30). The problem is that the amounts shown by in vitro tests to be effective are difficult to achieve in the body - which is precisely why Curcumin Solution has been developed – to maximise its absorption.

In 2018, researchers took a giant leap forward when they identified the effects of curcumin on a protein involved in cancer cells (31).

Note: It’s important to point out that Curcumin Solution 60 Licaps™ is not meant to rival the supplement Super Curcuma 500mg, one of the best products in our catalogue and one which regularly receives high praise from our customers. Curcumin Solution 60 Licaps™ is designed more to produce systemic benefits as the curcumin it contains reaches the bloodstream more easily. As far as the digestive system is concerned, Super Curcuma 500mg remains without doubt the best turmeric supplement on the market because it concentrates the curcumin more specifically in this area.

Additional steps to maximise the benefits of Curcumin Solution

To maximise the efficacy of Curcumin Solution, the following measures can also be adopted throughout the supplementation period:

1) Take Curcumin Solution capsules at mealtimes. Curcumin is always best absorbed when consumed with some dietary fat because fats slow down intestinal transit and increase the micelles’ contact time with the intestinal wall.

2) Increase your intake of omega-3 fatty acids. Omega-3 from oily fish and fish oil have powerful anti-inflammatory properties, but the amounts needed are difficult to obtain from diet alone. It’s therefore better to opt for EPA and DHA supplements (3 softgels a day).

3) Increase your consumption of fruit and vegetables, and at the same time, reduce that of pro-inflammatory foods rich in omega-6 (usually highly processed foods).

This new curcumin formulation brilliantly combines modern technology and ancient tradition. Technology, because its development has involved a feat of scientific skill (micro-encapsulation of the curcumin). Tradition, because it maximises the potential of a substance recognized by ancient systems of medicine for at least 4000 years.

It’s a timely response to unprecedented global interest and constitutes a perfect way of benefiting from the considerable therapeutic properties of turmeric.

Composition
Directions for use
Adults. Take 2 Licaps™ a day.
Each Licaps™ capsule contains 500mg of NovaSOL® Curcumin.
No reviews for this product yet