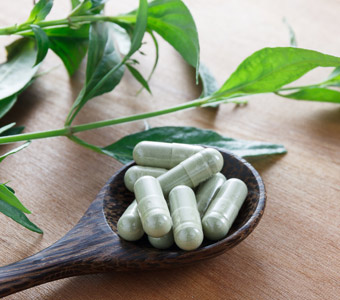 It is the most concentrated and scientifically supported extract on the market. The Andrographis Paniculata plant, native to India and Sri Lanka, is considered the herb for combatting winter ailments, but recent studies suggest its therapeutic properties may go far beyond such applications.

On this page, we’ll dig into all the benefits you may receive by taking a ParActin® supplement. But first, it’s important to understand exactly what the Andrographis Paniculata plant, or King of Bitters, is.

What is Andrographis Paniculata (King of Bitters)?

Andrographis paniculata, from the Acanthaceae family, grows on the plains of Southern Asia, particularly in Indonesia, India, China and Thailand. Closely related to Echinacea, this plant is more commonly known as the King of Bitters. It has been used for hundreds of years in traditional Asian systems of medicine, such as Chinese and Ayurvedic, to combat fevers and respiratory infections.

In fact, a study of 152 subjects with pharyngitis revealed Andrographis to be as effective as paracetamol at reducing fever and sore throat, which aligns with its traditional use as a natural way of supporting all-round ear, nose and throat health and respiratory tract health.

In addition, Scandinavian studies have shown its andrographolide content is responsible for its immunostimulant, antipyretic, anti-inflammatory, liver-protective and choleretic properties.

Its efficacy in this respect has been confirmed by clinical trials. Even the World Health Organization has recognized its effectiveness in inhibiting uncomplicated respiratory infections, such as colds, sinusitis, bronchitis and pharyngitis. It reduces both the symptoms and duration of these seasonal ailments.

In a randomized, double-blind, placebo-controlled study published in Clinical Rheumatology, 60 rheumatoid arthritis patients were given either 100 mg of ParActin® or a placebo three times a day for 14 weeks. ParActin® was found to significantly decrease swelling and pain in the joints and its ability to reduce the rheumatoid factor was clearly demonstrated, indicating reduced cartilage damage.

The results of another clinical study involving eight patients with various rheumatoid problems were published in Innovative Rheumatology. Administration of 300 mg of ParActin® a day for three and a half years resulted in a significant reduction in the incidence of swollen and painful joints.

In addition, researchers noted significant decreases in the rheumatoid factor, rate of erythrocyte sedimentation, overall pain and C-reactive protein, and an increase in overall quality of life.

Bone health is important at any age, but it’s even more important as a person becomes older and bones become frail. In vitro studies have shown that ParActin® may both inhibit NFAT activity, a transcription factor associated with bone erosion, and stimulate bone mineralization through the expression of Cox-2, offering potential benefits in combating osteoporosis. That being said, additional studies need to be done to determine the effects of an Andrographis herbal supplement on bone health.

Andrographis paniculata has been studied in connection with cognitive benefits as well, and the results are encouraging. In mouse studies, it’s produced an improvement in learning and memory and therefore may reduce cognitive decline associated with spatial ability. In two-month-old mice, administration of the substance over a four-week period even increased the development of new neurons.

Studies also demonstrate its ability to reduce hyperphosphorylation of tau proteins, which stabilize microtubules and are abundant in the brain. When tau proteins become defective and are no longer able to perform this role properly, it can result in cognitive issues, such as memory problems.

Among the top Andrographis paniculata health benefits, are its antioxidant effects.

Studies have shown ParActin® may provide the following antioxidant benefits:

ParActin® is a registered trademark of HP Ingredients.
Directions for use

After researching the King of Bitters uses, you may consider incorporating it into your diet and supplement regimen. Our ParActin® supplement contains 90 vegetarian capsules. If you take three Andrographis paniculata supplement capsules each day, one container will last thirty days.

Before you buy Andrographis paniculata supplements, you should talk to your healthcare provider. This step is especially important if you are currently taking any medications or have any underlying health conditions.

You may also need to adjust the dosage based on the King of Bitters benefits you hope to achieve. Consider pairing the best Andrographis supplement with a healthy lifestyle and diet for the best results.

I take this every day for my arthritis and is better than anything else I have tried. If I forget to take it I notice it right away. Highly recommend it.
HOBBS Sandra 2020-06-20

I have tried a lot of different supplements for my arthritic knee, but this is the one that really works.
References

Often felt as severe throbbing in the head, a migraine is painful and incapacitating. Here are 7 tips for relieving these much-dreaded headaches naturally.