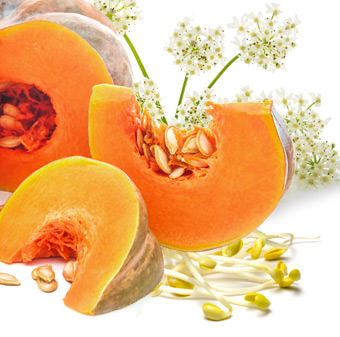 While there are many dietary supplements aimed at maintaining a healthy urinary system, few of them target all the mechanisms involved, encompassing bladder, kidney and prostate health. Supersmart’s Complete Uricare, is one formulation that does. It contains a whole host of carefully-selected natural active nutrients. Free from side-effects, it constitutes a powerful aid for restoring a healthy and effective urinary system.

Who is the Complete Uricare aimed at?

Complete Uricare is for anyone suffering from urinary issues (urine leakage, incontinence, repeated infections, overactive bladder…) as well as those at particular risk of such problems:

What are the ingredients in Complete Uricare capsules and how are they beneficial?

A reputable pumpkin seed extract (Go-Less®). Pumpkin seeds have been used for centuries in Central America to treat nephritis and disorders of the urinary system such as incontinence. The German Commission E recognizes pumpkin seeds for their ability to relieve symptoms of irritable bladder and for treating problems with micturition (bedwetting, enuresis, incontinence). Studies have confirmed that supplementing with pumpkin seed extract provides relief from these problems (3).

The pumpkin seed extract in this formulation is combined with a soy germ extract (SoyLife) under the brand name Go-Less®. This blend of pumpkin seed and soy germ extracts has been clinically studied for its benefits for the urinary system and in particular the bladder. Suitable for both men and women, it promotes regulation of bladder movements and prevents irritation caused by various factors such as the bladder compression that often accompanies an enlarged prostate.

D-mannose. D-mannose is a sugar which is not absorbed by the body. It is closely related to sugars naturally present on cell surfaces in the urinary tract. Pathogenic bacteria latch on to these surfaces to get to the bladder. When D-mannose is present in urine, these bacteria tend to bind to these sugars rather than to the urinary tract cell walls and can thus be easily excreted in urine (1). Several clinical trials have confirmed the benefits of D-mannose in preventing urinary problems (2).

Angelica (angelica archangelica). Angelica is a medicinal plant used for centuries to relieve gastrointestinal spasms, bloating and problems of the urinary system. Pharmacological tests have shown it to be powerfully antiseptic due to its high content of furanocoumarins, phytosterols and essential oil. It has an inhibitory effect on urease, an enzyme found in certain yeasts and pathogenic bacteria, including the dreaded Helicobacter pylori.

Zinc. Zinc is a trace-element (ie, it is only found in minute quantities in the human body) which helps maintain and restore normal function in the immune system, particularly in the urinary tract. Nowadays, zinc intake has decreased significantly due to modern farming methods which deplete the soil, and the refining of cereals. It’s not helped by alcohol consumption, drugs, diabetes, and digestive absorption problems (such as Crohn’s disease), all of which are on the increase, and go a long way to explaining the deficiency in zinc currently affecting countries in the West.

Molybdenum. Like zinc, molybdenum is a trace element that’s essential for health. It’s mainly present in the kidneys where it plays a vital role in protein synthesis and healthy urinary tract function.

Varuna (crataeva nurvala). Also known as three-leaved caper, varuna is a plant from Ayurvedic medicine with properties that support the kidneys and bladder. It is considered one of the best anti-lithogenic herbs, ie, it prevents the formation of kidney stones and may even break them up. This is due to the presence of lupeol, a compound that combats the enzyme responsible for forming the crystals. It’s also believed to improve problems of micturition, particularly those related to an enlarged prostate. These effects are only now beginning to attract support from researchers, the scientific community having long been reluctant to consider traditional medicines.

Extract of berberine. Berberine is a plant substance with significant therapeutic potential (antioxidant, anti-inflammatory, blood-sugar-lowering, hypotensive and hypolipidaemic effects). It is primarily used to reduce glycaemia in diabetics, but can also help prevent urinary infections: with its natural, broad-spectrum antibiotic activity, it combats the bacteria, protozoa and fungi involved in numerous infections.

Together, these various ingredients act symbiotically to help regulate and restore effective functioning of the urinary system as a whole.

What are the main problems associated with the urinary system?

As we age, the most common urinary tract problem we face is urinary incontinence. This is characterised by involuntary, uncontrollable urine leaks, both day and night. Those with the condition are often anxious and isolated, fearful of accidents and nasty odours. Having to plan for the smallest journey can discourage sufferers from straying far from their homes. Taking action to prevent this type of urinary problem is thus almost obligatory for anyone over the age of 60.

Another common problem is cystitis, an infection which mainly affects women (who have a much shorter urethra than men). This is inflammation of the bladder and usually occurs when bacteria outside the body enter the urinary tract through the urethra and begin to multiply. The longer urine remains in the bladder, the more time the bacteria have to proliferate and cause infection: its the urinary flow that expels bacteria and impedes their advance towards the kidneys. Anything that slows down the emptying of the bladder, for example, using a diaphragm for contraception, thus increases the risk of cystitis. This is also the case for anything that irritates the urethra mucosa such as feminine deodorants and some personal hygiene products. Sexually-transmitted infections (such as chlamydia or gonorrhoea) can also affect the urinary tract, as can abnormalities of the ureter.

What additional measures can be combined with taking Complete Uricare?

Note: this product should not be used as a substitute for a varied, balanced diet and a healthy lifestyle. It’s important to follow the directions for use, the recommended daily dose and the ‘use-by’ date. It is not recommended for women who are pregnant or breastfeeding, or for children under 15. Keep out of reach of young children. Store in a cool, dry place.

Composition
Directions for use
Adults. Take 4 capsules a day.
No reviews for this product yet