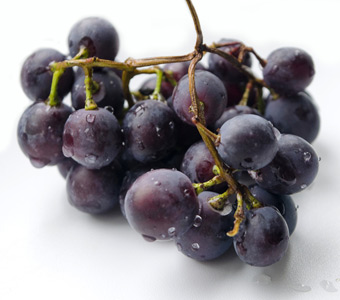 Resveratrol is a protective compound produced by red grapes (and certain other plants) as a defense against parasites.

What is the resveratrol source in our supplement?

While red wine previously contained 8 to 10 mg resveratrol per liter, there is unfortunately almost no resveratrol in today's red wine due to widespread use of pesticides. We have, however, managed to find a source of pharmaceutical grade resveratrol, extracted directly from organic red grapes, which retains the natural balance of all its active compounds: polyphenols, flavonoids, anthocyanidins and oligoproanthocyanidins (OPCs).

This is then enriched with resveratrol extracted from the plant Polygonum cuspidatum and standardized to provide 10% resveratrol. It's the most natural and powerful extract available. Resveratrol is without doubt the most effective and best-researched phytonutrient you can take to maintain and protect your health. It is a brilliant solution to many age-related health problems.

What do the studies show about Resveratrol benefits?

Many studies have demonstrated that resveratrol is a powerful antioxidant and that it protects human health through a number of mechanisms. Indeed, research attributes much of the health protection conferred by the famous French paradox' to resveratrol.

Resveratrol is the only natural product with such strong evidence to show it stops cancerous cell development at various stages: a study published in the prestigious review Science' showed that resveratrol blocks the proliferation of cancerous cells during three important stages of development.

A study in which mice were given resveratrol over 18 weeks showed a reduction in skin tumors of 98%. Resveratrol destroys cancerous cells whether or not they are either estrogen-dependent, or have the gene, p53.

An Austrian study showed that resveratrol prevented certain types of cancer from metastasising to bone. Other research has demonstrated that in some cases, it improved the results of chemotherapy. It can also block the cancer-promoting effects of a linoleic acid-rich diet. Unlike many drugs, resveratrol protects, rather than destroys, healthy cells. Its anti-cancer action is diverse, powerful and sophisticated.

Preliminary studies suggest that resveratrol - administered singly, and in combination with other antioxidants - protects the brain against oxidative stress. Oxidative stress is known to play a major role in most neurodegenerative diseases.

A Chinese study has recently shown that, when injected immediately after injury, resveratrol is as effective as the drug prednisone at protecting against inflammation of the spinal cord, but with additional benefit of antioxidant protection. A study of rats pre-supplemented with resveratrol for 21 days has shown that it improves the prognosis and reduces the permanent effects of stroke.

According to a study at Harvard Medical School, resveratrol activates a longevity gene in certain strains of yeast and extends life expectancy by 70%. It works in the same way as calorie restriction (the only scientifically proven way of increasing longevity) by activating SIR genes. Research to date has been restricted to yeasts, flies and nematodes but it's worth noting that humans also possess these genes.

Evidence from numerous studies confirms that resveratrol offers many preventive effects against premature aging. To benefit from these anti-aging effects, resveratrol can be taken as a supplement on its own or in antioxidant combinations such as in the formulations Resveratrol Synergy and AntiOxidant Synergy.

Subscribe to our newsletter
and obtain a 5% permanent discount
Our selection of articles
Resveratrol: the benefits and side-effects of this ‘fountain of youth’

Resveratrol is a powerful and beneficial polyphenol found at high levels in grapes - and therefore wine. Discover its effects and in which circumstances to either prioritise or avoid it.

Accelerated ageing of the skin, joints, and hair, plus fatigue, etc … your body is at risk from oxidative stress. The good news is there are ways you can protect yourself.

Accelerated aging of the skin, joints, and hair, plus fatigue, etc … your body is at risk from oxidative stress. The good news is there are ways you can protect yourself.