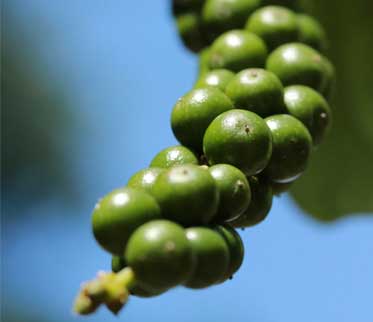 We’re all familiar with the hotness of black pepper: it is due to the biological activity of several active compounds, in particular piperine.

What are the main effects of Bioperine®?

Piperine is an alkaloid used for more than 20 years to maximize the bioavailability of nutrients. Black pepper is one of three essential natural ingredients used in the majority of Ayurvedic formulations. It can increase absorption of selenium and vitamin C by up to 42% and 50% respectively. Below are just some of the many micronutrients where absorption can be improved by piperine:

Its effects are due to three distinct mechanisms of action:

What are piperine’s other effects?

In addition to optimizing bioavailability, piperine also offers digestive benefits: it stimulates appetite and facilitates digestion (by increasing the activity of salivary amylase and trypsin, an enzyme in pancreatic juice which helps ‘break’ proteins (7)).

Piperine also helps increase the bioavailability of certain drugs such as ibuprofen (8). It therefore should not be taken at the same time as medication.

How is Bioperine® produced?

Black pepper is a climbing vine that grows in forest habitats and equatorial climates: it can only be cultivated between the latitudes 15 degrees north and 15 degrees south.

Black pepper is picked when the berries (or drupes) start to turn red: it is at this stage that the amount of essential oil is at its peak. They are then deseeded, dried in the sun till the berries go black, then plunged into boiling water for several minutes. The heat ruptures the peppers’ cell walls and releases heat-resistant enzymes. The drupes are then dried in the open air before the outer coating is removed.

In the case of Bioperine®, the piperine content is then increased so that it makes up around 95% of the natural black pepper extract.

It’s worth noting that while piperine can be synthesized in the laboratory using an enzyme called piperotransferase, Bioperine® contains natural piperine extracts from black pepper drupes, unlike many piperine supplements on the market.

Can Bioperine® be combined with other supplements?

Piperine potentiates the bioavailability of many supplements, but it is curcumin supplements, known for their powerful anti-inflammatory effects, that most benefit from being combined with Bioperine®.

Curcumin’s bioavailability is actually very low because it is quickly metabolized in the liver. Thus taking 2g of curcumin will only produce a very slight increase in plasma concentrations. However, taking piperine at the same time produces a clear increase in curcumin levels, in the region of 2000%, within around 30 minutes of ingestion (6).

The mechanism responsible is inhibition of glucurono-conjugation: this slows down the breakdown of curcumin by the liver, considerably expanding its window of absorption.

Composition
Each vegetarian capsule contains 10 mg of Bioperine®.
Directions for use
Take one vegetarian Bioperine® capsule at the same time as your other supplements.

Digestion problems are extremely common. If you’re among the many sufferers, try these 10 natural tips for facilitating the digestive process and restoring your day-to-day well-being.

Wondering how to whiten and maintain your teeth naturally? Follow our 10 tips for achieving a dazzling, Hollywood-style smile.

A key ingredient in Asian cooking, ginger has also been used in traditional Chinese medicine for thousands of years. What are its benefits? How should you use it? Read on to find the answers to these and other questions.