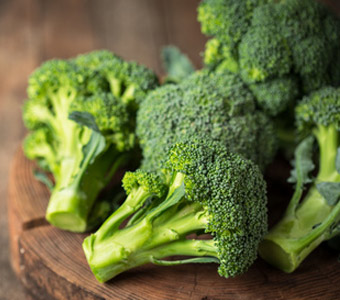 Our dietary supplement Broccoli Sulforaphane Glucosinolate offers a simple way to capitalise on broccoli's many health benefits. It ensures an optimal intake of the active substance sulforaphane, one of the vegetable's best-studied compounds.

Why opt for Broccoli Sulforaphane Glucosinolate?

Broccoli is part of the family of cruciferous vegetables, along with cabbage, cauliflower and Brussels sprouts, which have for several years been hailed for their health benefits and disease-fighting virtues. Over time, broccoli has thus come to be seen as a ‘superfood', which is why broccoli extracts are now available to buy in the form of dietary supplements. It is the extraordinary properties of broccoli's constituents that give it this reputation.

Broccoli Sulforaphane Glucosinolate is formulated from a standardized extract of broccoli (Brassica oleracea). This supplement contains one of the highest concentrations of sulforaphane and is one of the most stable and bioavailable formulations on the market. It is now available to buy at Supersmart in capsule form, at a suggested dose of two capsules a day, which provides 600mg of broccoli extract.

What are the benefits of Broccoli Sulforaphane Glucosinolate?

Broccoli's therapeutic benefits are due to certain components such as glucosinolates and the enzyme myrosinase. Before being highlighted for their health virtues, these compounds were primarily known for protecting cruciferous vegetables against destructive insects. Research into these defense mechanisms showed that glucosinolates and myrosinase may also have a protective effect on the human body.

Composition
Directions for use
Adults. Take one to two capsules a day.
Each capsule contains 300 mg of broccoli sprout extract (Brassica oleracea) standardized to provide 10% sulforaphane.

Subscribe to our newsletter
and obtain a 5% permanent discount
Our selection of articles
Propolis: how to get the best out of this beehive treasure

Produced by bees to protect the hive from the cold and diseases, propolis is a veritable treasure trove of beneficial compounds. Discover its secrets and how to get the most out of it.

The 5 best vitamins for the immune system

The European Food Safety Authority (EFSA) has compiled a list of vitamins that support normal immune system function. Discover these 5 unquestionably effective vitamins, and the foods that contain them.

The 3 best minerals for the immune system

Do you know which three minerals best support normal immune system function, according to the European Food Safety Authority (EFSA)? Discover how these minerals work and which foods contain them.