Our artemisinin supplement is the best immunostimulant for fighting infections and corrupted cells. 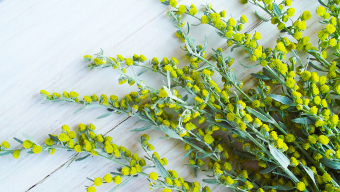 Artemisinin is a highly effective dietary supplement that helps cleanse the body, boost the immune system, fight infections and contain the proliferation of harmful cells. This carefully developed and 100% natural artemisinin supplement is standardized to 98% of the active substance artemisinin, the discovery of which earned the scientist responsible the Nobel prize in medicine.

Artemisinin is obtained from the plant Artemisia annua, or sweet wormwood, a herbaceous plant used in Chinese medicine for millennia for its ability to eliminate parasites, viruses and bacteria.

Its active principle, artemisinin, was identified at the beginning of the 1970s and quickly became the key compound in malaria medicines. Highlighted more recently, artemisinin’s anti-inflammatory and immunomodulatory benefits are attracting keen interest among the scientific community.

What is artemisinin, or sweet wormwood?

Sweet wormwood, or to give it its Latin and Chinese names, Artemisia annua and qing hao, is a glabrous and highly aromatic plant belonging to the large Asteraceae family. Originating from Asia — before spreading to Europe and Africa— it has been an important component of Chinese herbalism for more than 2000 years. It was traditionally consumed in the form of a decoction, to combat fevers and parasitic infections, and more specifically, to get rid of malaria.

The rediscovery of sweet wormwood has had a significant impact in containing the spread of this highly dangerous condition, which is caused by a parasite entering the bloodstream from a mosquito bite. This use case of artemisinin actually came about at the height of the Vietnam war.

Nobel Prize Awarded for the Discovery of Artemisinin

The ranks of the North Vietnamese army were being ravaged by malaria and they asked Mao Zedong’s China for help. In March 1972, inspired by Chinese traditional medicine, the Chinese professor Tu Youyou succeeded in isolating its active principle: artemisinin.

Out of this came an effective remedy for malaria. Nowadays, the most widely used medicine for this condition is still produced using this substance or its derivatives. Its discovery went on to earn Professor Tu Youyou the Nobel prize for medicine in 2015.

How does this sesquiterpene lactone work in the body?

Let’s turn now to the nature and action of artemisinin.

This molecule is actually a sesquiterpene lactone, which has a functional group with two atoms of oxygen. They are linked by a peroxide bridge, to which its antimalarial properties appear to be attributed. It’s thought this bridge acts by blocking the enzyme that ensures the parasite is provided with calcium, therefore impeding its growth in the body.

Another mechanism of action may lie in its ability to generate free radicals in the presence of iron, a trace-element abundant in parasites. Once disseminated, it seems the free radicals eliminate the parasites by making their cell membranes explode.

Erecting a Barrier Against Parasitic Infections

Day after day, your body faces waves of infectious agents — e.g. bacteria, viruses, parasites — all of which try to enter your system and take up residence, causing all sorts of illnesses. Taking artemisinin for immune system function may boost your resistance to these multiple external attacks.

In fact, artemisinin does more than just stop Plasmodium, the parasite responsible for malaria; it combats many other potential infections. In particular, it is recognized for combatting schistosomiasis, also known as bilharzia, an endemic condition caused by hematophagous parasite worms called schistosomes. One study showed that taking artemisinin-based drugs reduced the number of these worms, the presence of their eggs and the parasite’s fertility in the body.

Artemisinin also has a significant effect against helminths, the term for worm-like parasites, the best-known of which is tapeworm. Did you know that 1.5 billion people are infected with soil-transmitted helminths globally? A study from 2018 confirmed that artemisinin (ART) and its derivatives are potentially effective at combating various helminthic conditions.

The study was conducted on a wide range of helminths:

Another study from 2017 found that artemisinin and its derivatives may also be good alternatives for combatting protozoal infections.

As well as constituting a barrier against a large number of parasites, artemisinin has also shown an impressive ability to fight bacterial infections.

Let’s take the example of a well-known bacterial infection: Lyme disease, also known as Lyme borreliosis. Transmitted by a bite from a contaminated tick, Lyme disease can cause pain and fever as well as neurological, respiratory and eye problems. A 2016 study showed that eleven anti-malarials, such as artemisinin, were effective at combating the round body form of Lyme disease, which are a type of persister bacteria that may be resistant to antibiotics, like amoxicillin.

A study by Professor Yesha Patel and his team highlighted the fact that this active substance was also able to combat another well-known bacterial infection: tuberculosis. Tested in in vitro culture, artemisinin was shown to act synergistically against the bacilli Mycobacterium bovis and Mycobacterium tuberculosis H37Ra. In the study, artemisinin helped cause the membranes of attacking bacteria to disintegrate, significantly reducing their numbers.

Stimulating the Immune System Against Viruses

This active principle has been shown to be effective at fighting viruses. In a study from November 2018, the German researcher Thomas Effert observed there was good in vitro and in vivo evidence of the positive effects of artemisinin and its derivatives against certain DNA viruses, namely:

Artemisinin Supports the Body's Fight Against its Own Corrupt Cells

In terms of cleansing the body, artemisinin not only protects you from external agents; this high-quality nutritional supplement also helps get rid of your own corrupted cells.

What’s the mechanism involved here? As previously mentioned, it seems artemisinin naturally generates free radicals which destroy corrupted cells and prevent them from multiplying. This has the advantage of being a specifically targeted action which does not affect healthy cells.

Note: during this temporary phase of elimination of harmful cells, it’s best to avoid taking antioxidant supplements which may hinder the oxidative effect of artemisinin.

A study from 2015 reported that artemisinin “has powerful anti-inflammatory and immune-regulatory properties,” which can balance its immune-stimulant character.

These anti-inflammatory effects have been attributed to the inhibition of multiple receptors, including Toll-like receptors, Syk tyrosine kinase, phospholipase Cγ, etc.

Taking the example of gout, the inflammatory condition caused by excess uric acid in the blood, a study in September 2019 showed that artemisinin was able to inhibit activation of the NLRP3 inflammasome by suppressing interaction between NLRP3 and the NEK7 protein.

According to researcher Ives Charlie-Silva, artemisinin “is able to modulate the immune response by regulating cell proliferation and the release of cytokines.” The active principle in sweet wormwood thus helps calm excessive auto-immune responses.

What does our sweet wormwood supplement contain?

Formulated to act as a biological shield against infection, our artemisinin supplement contains only natural ingredients. Its main ingredient, artemisinin, comes from the aerial parts of Artemisia annua.

Also known as sweet wormwood, this plant was widely used in traditional Chinese medicine, as well as being very popular in Europe, as far back as Antiquity; it was recognized for its ability to strengthen the body, relieve digestive problems and painful periods, and to relieve worm-related conditions. In this product, the artemisinin extract is standardized to 98% to ensure optimal efficacy.

This immunostimulant is completed and stabilized by acacia gum — a sap exudate from the African tree Acacia senegalensis — and white rice flour. It contains no other ingredients.

Whenever taking an artemisinin supplement, it’s essential to be aware of artemisinin's benefits and side effects. But what are the side effects of artemisinin? There generally aren’t any, but everyone has different health needs, and doing your own research is just as important as deciding whether to buy artemisinin in the first place.

Understanding the side effects of taking artemisinin starts with answering the question: what is the artemisinin plant? Online research can tell you everything you need to know about artemisinin's health benefits and any groups that should tread with caution when using artemisinin.

You should also speak to your doctor if you take any other supplements or pharmaceuticals. People with chronic conditions need to consider whether an artemisia annua supplement will react with any other medications they are taking.

Furthermore, suppose you happen to be taking any other supplements for health reasons. In that case, you should also work out if any active ingredients don’t mix well with the artemisinin dietary supplement. This is also something you can talk to your doctor about.

Taking artemisinin supplements responsibly starts with research and personal responsibility, so take the time to do your research before ingesting an artemisinin capsule.

Each vegetarian capsule contains 150 mg of artemisinine.
Directions for use

How should you take Artemisinin capsules?

Figuring out how to take artemisinin is part of safe supplement usage. Artemisinin is a highly safe, natural supplement. Orally administered supplements follow a conventional dosing regime of 500-1000 mg on the first day you take it, followed by 500 mg daily for four days.

It’s recommended that you take these capsules before eating to get the maximum benefit from them. Simply swallow a capsule and wash it down with a glass of water. Make sure you follow the serving recommendations on the container and refrain from taking any extra.

Remember, though, it is always advisable to consult your doctor before you buy artemisinin or any other dietary supplements. Also, avoid taking artemisinin during pregnancy.

To get the maximum Artemisinin supplement benefits, you should also try to: