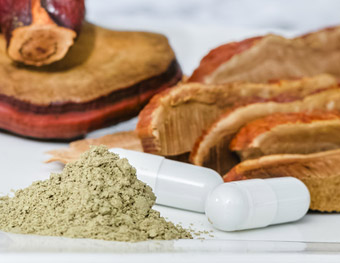 “Mushrooms are miniature pharmaceutical factories, and of the thousands of mushroom species in nature, our ancestors and modern scientists have identified several dozen that have a unique combination of talents that improve our health“, Paul Stamets, leading American mycologist and member of the editorial board of The International Journal of Medicinal Mushrooms.

SuperSmart has chosen seven of these species for its brand-new nutritional formulation which offers exceptional benefits. Produced using an enzyme mixture and the latest advances in microbiology, Organic MycoComplex optimises the activity and bioavailability of the best mushroom species available in the field of nutritional supplementation. So you can be among the first to benefit from some of the most promising medicines of the future ...

Who is Organic MycoComplex designed for?

This formulation is primarily for people suffering from fatigue, whatever the cause. It is also for those who:

What is in Organic MycoComplex?

Prior to its cultivation in 1979, maitake was known as the dancing mushroom because it’s said that those who found it growing wild danced with joy at their discovery. It is a highly-valued mushroom which contains a number of polysaccharides. Among its properties, scientists have shown that it’s able to:

Attention: The extracts do not all have the same proportion of active principles nor the same concentration. This product should not be taken alongside anti-diabetes medication.

This ‘mushroom of immortality’ has enjoyed exceptional renown in Asia for more than 2000 years. There are references to it in the oldest written Chinese pharmacopoeia (dating back to 56BC) and it was probably being used by Asian populations for thousands of years before then.

It’s very rarely found growing wild, but cultivation became possible after the 1970s under highly specific laboratory conditions. This was truly liberating given the significance of its therapeutic properties, which include the ability to:

Attention: In traditional Chinese medicine, only the flesh of the mushroom is used (ie, the cap and the stalk) but several supplement manufacturers use the mycelium, a less expensive part of the mushroom which does not offer the same benefits.

Used for over 2000 years for its medicinal properties, shiitake is probably the most widely-studied mushroom for its anti-cancer virtues. It helps to:

Active compounds: Its properties come from two compounds in particular, lentinan (1-3 beta-D-glucan) (17) and eritadenine. These compounds do not have a direct cytotoxic effect on tumors but they modify the body’s biological response. Increases have thus been observed in secretion of interleukin (IL-2) and additional activation of macrophages.

Native to Brazil, but also widely-found in Asia, the royal sun mushroom is highly valued for its delicious, almond-flavored flesh. It also offers significant benefits:

Active compounds: brefeldin A, ergosterol (the primary constituent), blazeispirol A (produced by fermentation of the mushroom), agaritine and polysaccharides. These compounds activate a number of molecular cascades that lead to apoptosis, the programd death of abnormal cells. They also play a role both in activating NK cells, normal cell signaling and supporting damaged blood vessels (26).

Unlikely as it might seem, this increasingly popular mushroom is nothing more than a parasite of the birch tree. Yet behind this inauspicious exterior lies a powerful health-boosting mushroom with a delicate flavor. With blood glucose-lowering properties, it has been used for centuries in Asia and Russia to calm inflammation and optimise digestion. Interest in chaga intensified dramatically when in 2011, a team of scientists from Queensland University of Technology discovered that in certain cases, it could reverse tumors in rodents, with no apparent side effects. Researchers are currently investigating its potential to:

Active compounds: inotodiols (triterpenoids), oxalic acid, gallic acid, protocatechuic acid and p-hydroxybenzoic acid. Terpenoids are responsible for the anti-diabetes effects by inhibiting alpha-glucosidase, while the anti-fatigue effects come more from polysaccharides which increase glycogen in the muscles and liver, while reducing levels of nitrogen in urea and restoring those of endogenous antioxidants (glutathione, superoxide dismutase) (33). Its pain-relieving properties are due to inhibition of nitric oxide synthase (iNOS) and cyclooxygenase-2 (COX-2). Last but not least, its anti-proliferative properties are the result of modulated expression of caspase apoptosis-triggers by lignin derivatives.

Attention: Its use is contra-indicated in type 1 diabetics, those with coagulation disorders and those who have had a transplant.

Organic MycoComplex also contains extracts of polyporus versicolor, and cordyceps (effective at stimulating poor sexual function and restoring energy (34)), as well as selenium, prebiotic fructo-oligosaccharides and an extract of ginseng, the essential plant-source aid for stimulating the immune system and fighting fatigue.

What are the benefits of taking Organic MycoComplex?

Europeans and North Americans tend to be wary of mushrooms because of their potential toxicity. But they are missing out. East Asian populations have always regarded them as an essential part of their pharmacopoeia, while the scientific community continues to link them to an increasing number of therapeutic benefits. It now seems that mushrooms’ range of activity is huge: they are in a therapeutic class of their own, with an almost unrivalled wealth of nutritional virtues.

Gut health. Mushrooms contain a large amount of insoluble dietary fibre which increases the weight and volume of stools, facilitating their elimination from the body and preventing constipation. They also contain non-digestible sugars which nourish ‘friendly’ bacteria in the gut and bowel, helping to strengthen the intestinal barrier and reduce systemic inflammation.

The field of oncology. Two types of compound are responsible for the anti-tumor properties of mushrooms: polysaccharides and lectins. Polysaccharides are long chains of simple sugars. They induce production of cytokines such as interferon or IL-2 which activate the proliferation of a number of immune cells and boost the destruction of foreign elements. Lectins are carbohydrate-binding proteins which induce apoptosis in abnormal cells including tumor cells.

The field of cardiology. As a result of its various ganoderma, coumarin and polysaccharide compounds, mushrooms help lower cholesterol and triglyceride levels, two factors associated with cardiovascular problems.

The immune system. This is mushrooms’ ‘strongest suit’. Most of them have properties that strengthen weakened immune systems, particularly as a result of radiotherapy or infections. The polysaccharide compounds increase numbers of macrophages, NK cells and cytotoxic T lymphocytes.

Activity against free radicals. Mushrooms have certain antioxidant properties and thus help combat the oxidative stress involved in many health problems. When the body is exposed to high levels of free radicals, normal detoxification processes are unable to function properly which leads to a state of pathological imbalance.

Stress. Like ginseng and ashwagandha, mushrooms are considered to be adaptogens, helping to restore and balance various parameters associated with stress. They act rather like spark plugs, improving the body’s adaptation to stress and acting as an energy potentiator of the adrenal system

Did you know?
Mushrooms, which are known scientifically as Eumycetes, are phylogenetically closer to us than to plants.

Many experts agree that mushrooms currently represent one of the most promising areas of medicine, and that their huge potential is only just starting to be scientifically evaluated. With its exceptional range of benefits, Organic MycoComplex has more than earned its place in the SuperSmart catalogue.

Composition
Directions for use
adults. Take 3 capsules a day.
This product should not be taken alongside diabetes medication. Its use is contra-indicated in type 1 diabetics, those with coagulation disorders and those who have had a transplant.
No reviews for this product yet