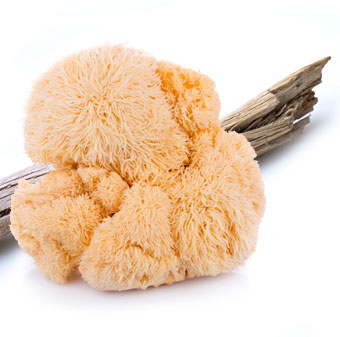 Hericium erinaceus, also known as Lion’s Mane, is an edible mushroom which has been used for centuries in traditional Chinese medicine. It is rich in exceptional compounds such as β-glucans, polysaccharides associated with lowering blood cholesterol, as well as hericenones which support neuron function.

Hericium erinaceus, the champion of neuroprotection

In China, where it originated, it’s called "hóu tóu gū" and in Japan, "yamabushitake". A highly unusual mushroom that resembles a long white beard or lion’s mane, its use in Chinese medicine dates back to the Han dynasty, 200 years BC, a period when it was already considered to have extraordinary medicinal properties.

In recent years, as interest in traditional remedies has grown, a number of scientific studies have confirmed its traditionally-recognized therapeutic benefits and have highlighted a remarkable physiological property: Lion’s Mane protects, optimises and repairs the nervous system.

The Hericium erinaceus mushroom is particularly rich in bioactive substances, most of which are believed to contribute to its medicinal properties. However, it is undoubtedly the β-glucan polysaccharides and hericenones which are of most interest. The former are a form of soluble fibre which positively affect lipid metabolism, while the latter are phenolic compounds that support neuron function.

The most exciting potential offered by H. erinaceus relates to neuron activity. Studies show that extracts of Hericium erinaceus mushrooms are able to increase the production of nerve growth factor (NGF) (6), a neuropeptide known for its key role in neuron growth and survival (7-9), particularly in the part of the brain responsible for memory-processing called the hippocampus. This effect is due to the properties of hericenones of which Lion’s Mane has a guaranteed content.

NGF is a protein involved in regulating the growth, proliferation and survival of central and peripheral neurons. It plays a role in numerous mechanisms:

NGF is a peptide produced by a large number of cells such as those of the immune system, but production declines with age and in the presence of certain disease states. Unfortunately, NGF cannot be used in a treatment or preventative capacity as it is unable to cross the blood-brain barrier. We therefore have to rely on natural compounds with a lower molecular weight (which can cross this barrier) that promote NGF synthesis within the body. That’s exactly what the hericenones in Lion’s Mane do.

Several studies have demonstrated the effects of H. erinaceus on mental efficacy in people with cognitive problems (33) and its use in dementia, cognitive dysfunction and memory problems (10). It seems that it acts primarily as a nootropic and that it’s necessary to take a supplement in order to maintain the effect.

Other properties of Lion’s Mane

1) Anti-cancer and immune-modulating effects. A number of studies have shown that H. erinaceus offers benefits against cancer. Its polysaccharides may increase numbers of immune cells such as macrophages and T lymphocytes (1) as well as nitric oxide (NO) production and cytokine expression (2). Other research has shown extracts of H. erinaceus to increase the cytolytic activity of Natural Killer (NK) cells and to potentially inhibit neoangiogenesis in tumors. One study (4) also showed it was able to combat proliferation of pre-cancerous cells and induce their death (apoptosis).

2) Cardioprotective effects. As indicated by traditional Chinese medicine, H. erinaceus offers benefits for cardiovascular health. Its lipid-lowering effect is due to the action of the polymers it produces. When administered orally, these natural compounds are able to reduce blood levels of LDL-cholesterol and triglycerides, and increase those of HDL-cholesterol. It’s thought that polymers may also play a role in modulating the expression of a gene involved in lipid metabolism (5).

3) Antioxidant effects. Oxidative stress plays a key role in many pathologies including cancer, and cardiovascular and neurodegenerative diseases (12). Oxidative stress is the result of an imbalance in pro-oxidative and antioxidant agents but can be inhibited, thus helping to prevent irreparable damage to the body, by consuming plenty of antioxidant-rich foods or by taking supplements. Extract of Hericium erinaceus is one such supplement, as it can neutralize free radicals and prevent cell membrane peroxidation (13), a process involved in aging. These effects are due to its phenolic compounds (14) and polysaccharides (15).

4) Support for stomach health. Several years ago, a study demonstrated the benefits of Hericium erinaceus in relieving stomach ache (16), an effect believed to be related to its saponin content.

Liquid solvents such as water are normally used to obtain a mushroom extract. This acts a bit like a vegetable soup where the hot water enables chemical compounds to be extracted from solids. Immersing Hericium erinaceus in hot water for a certain period, allows all its water-soluble compounds, including its precious β-glucans, to be extracted. The liquid obtained is then dehydrated, producing a powder that’s highly-concentrated in active principles.

In the case of most Hericium erinaceus extracts, the production process stops there. But Hericium erinaceus also contains compounds non-water-soluble compounds such as hericenones. In order to recover these, a second extraction by alcohol is also required. This is a vital step since it’s the hericenones which are primarily responsible for the mushroom’s benefits for neuron function (they stimulate the production of NGF). Lion’s Mane is one of the rare supplements to undergo this dual extraction process and thus offers a guaranteed content in both polysaccharides (water extraction) and hericenones (alcohol extraction).

Are there other measures that can be combined with Hericium erinaceus supplementation to support neuron function?

Numerous studies have shown that neuroplasticity and neurogenesis can be improved by at least four factors:

Several species of mushrooms such as Cordyceps (27), Pleurotus (28) and Ganoderma (29) are known to offer similar effects to those of Hericium erinaceus. It may therefore be beneficial to combine Lion’s Mane with other supplements available to buy at Supersmart such as Reishi Extract to enhance its anti-cancer effects, or even with Huperzine A to maximise the neuroprotective effects of Lion’s Mane.

When and how should Lion's Mane supplement be taken?

Lion’s Mane supplement contain eight times the concentration of active principles as the plant powder. They have a guaranteed content of beta-glucan polysaccharides of 30% (150mg per capsule), and of hericenones, due to the dual extraction technique used.

The recommended dose to take is 1-2 capsules a day, preferably with meals. The risk of side-effects is very low and Lion’s Mane can thus be taken for 1-3 months. Having said that, this mushroom should not be taken by those with disorders where NGF is already elevated such as allergies, fibromyalgia or polycystic ovary syndrome…

Composition
Directions for use
adults. Take 3 capsules a day.
Each capsule contains 500 mg
No reviews for this product yet