Organic Chaga Extract is the Siberian secret to boosting health: 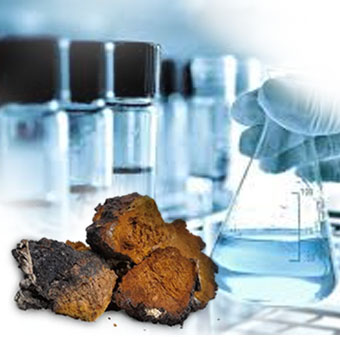 Organic Chaga Extract is a fortifying dietary supplement in vegetarian capsules, extracted from Chaga and now available to buy at Supersmart. Chaga is a mushroom that grows exclusively on birch, the characteristic tree of the Siberian Taiga, and which has featured in traditional Siberian pharmacopeias for thousands of years. Primarily consumed for its regenerating, reinvigorating and antioxidant properties, Chaga supplements are popular for energizing the immune system and warding off winter infections.

What is Chaga, exactly?

Chaga is a mushroom associated with the birch tree, which flourishes in the heart of one of the coldest and most hostile regions of the planet. It’s found mainly in the vast wildernesses of Siberia, home to fast-flowing, icy rivers.

In this hugely inhospitable environment, the Chaga mushroom is revered by the Nenet, Evenk and Mansi. For thousands of years, these Indigenous Peoples of Siberia have had to rely on hunting wild reindeer, red deer and ptarmigan, and fishing salmonids, monkfish and grayling, and gathering, both for nourishment and for developing natural and powerful medicine.

Chaga was, for a long time, one of their best-kept secrets: they used it to make an invigorating tea to help them ward off fatigue, cold, hunger and any illness or injury that might befall them in the harsh, unforgiving conditions where they reside.

It was only from the 1980s onwards that this knowledge reached a wider audience as European settlers became more interested in indigenous medicinal practices than in their own pharmacopeia.

Today, these traditional practices have been validated by scientific studies that have confirmed Chaga to be an exceptional natural compound capable of enhancing the immune system in a multitude of ways.

Its popularity in the West has risen sharply since the discovery in a 2011 study that it also offered potential for slowing down the progress of certain tumors.

Organic Chaga Extract is a natural extract which, above all, boosts immunity.

Immunity is the body’s ability to defend itself against threats in the form of microbes — viruses, bacteria, pathogenic fungi, parasites — and anarchic cells that have become cancerous.

Chaga is widely used as a natural medicine in China, Russia, Korea and the Baltics.

Some known Chaga benefits include:

The renowned international author David Wolfe has written a book on the healing powers of this extraordinary mushroom. In it, he recounts a delightful tale: according to Indigenous Peoples of Siberia, Chaga always chooses to “make its home” in a fragile part of the tree in order to protect it. And when we consume it, we too are benefiting from its protective properties.

How do Chaga mushrooms help boost the immune system?

Your immune system protects against diseases with inflammation. However, there are some diseases that cause long-term inflammation. Chaga Extract has been shown in some studies to impact immunity by reducing the long-term inflammation in the body. It appears that Chaga can promote the formation of beneficial cytokines, the proteins that regulate the immune system. It might also stimulate white blood cells, which are needed to fight off harmful viruses and bacteria.

Based on this research, it’s possible that a Chaga supplement could strengthen the immune system.

Other studies show Chaga could prevent the production of other harmful cytokines, which would trigger inflammation and bring on disease. It’s a great compound for overall immune support.

What is our Chaga mushroom supplement composed of?

Recent chemical tests have shown that Chaga contains more than 200 types of active substances. The most significant of these are beta-glucan polysaccharides, which are responsible for most of its blood-sugar-lowering, antioxidant and anti-inflammatory effects, and its benefits for immune function.

Our Organic Chaga Extract supplement contains a high level of these polysaccharides due to the water extraction used to obtain the Chaga sporophores.

This method of extraction also enables the following compounds to be preserved:

What additional measures can be combined with our Organic Chaga Extract?

To benefit from Chaga’s tonic effects, Indigenous Peoples of Siberia would remove part of the mushroom from the birch and add it to hot water to make tea. But with Supersmart’s Organic Chaga Extract, standardized in polysaccharides for maximum effect, you can simply swallow a capsule instead.

In addition, we recommend you take the following three steps throughout the supplementation period:

If your immune system is seriously compromised, you could also take an extract of green propolis alongside your Chaga supplement.

Attention: taking Chaga is contraindicated for those suffering from Type 1 Diabetes, those suffering from coagulation problems and those who have undergone a transplant. However, most consumers who do not have an underlying health condition will not experience any Chaga mushroom side effects.

To maximize the impact of Supersmart’s Chaga supplement on the immune system, we recommend adults take three capsules — equal to 1,500 mg of Chaga Extract — daily . Each capsule contains 500 mg of 8:1 Chaga Extract (Inonotus obliquus). The Chaga mushrooms used for our Chaga Extract are all wild harvested and manually collected. Chaga Extract should be stored out of direct light, heat and humidity.

Subscribe to our newsletter
and obtain a 5% permanent discount
Our selection of articles
How are dietary supplements produced?

Why is it best to combine vitamin B6 with magnesium?

When it comes to the trace-element magnesium and vitamin B6, there’s strength in unity. Discover why you should combine the two.