L-Selenomethionine
Tiredness and Lack of energy

No reviews
Reviews
$19.00 In Stock
Description
L-selenomethionine is a bioavailable from of selenium.
Certificate of Analysis

Price summary
Total price of the offer
$96.00
Add To Cart 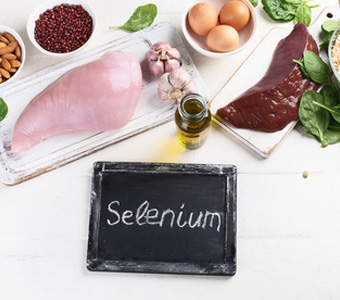 L-selenomethionine is a single chemical entity containing molecularly integrated selenium instead of sulfur in the methionine molecule - methionine being an essential amino acid. It is therefore a particularly safe form of selenium supplementation because, unlike other forms, it does not release inorganic selenium into the body. You can buy L-selenomethionine at Supersmart.

Plants absorb selenium from the soil and convert it into organic forms. Selenium is therefore found as selenomethionine in wheat and other cereals and is thus also the main type of selenium present in foods. When ingested in this form, it replaces the sulfur in proteins, both in animals and humans. Selenomethionine is also the main form in which the body stores selenium. It is directly incorporated into proteins via metabolic pathways similar to those used by methionine. It is converted into selenocysteine, and then incorporated into selenoproteins.

The replacement of methionine by selenomethionine in the protein structure does not induce any functional changes. In fact, selenium in the protein structure protects DNA from oxidation more effectively than the sulfur in methionine. During photochemical reactions, the carbon-selenium bond is more easily broken compared to the carbon-sulfur bond. L-seleno-methionine preferentially accepts' the energy from light and provides greater protection to the skin against UV damage.

What is the benefit of using L-selenomethionine?

Led by the US National Cancer Institute, the Selenium and Vitamin E Cancer Prevention Trial is an ongoing study using L-selenomethionine. Launched in 2001, the 12-year study involves 35,000 men in the US, Canada and Puerto Rico and is investigating how selenium and vitamin E may protect against prostate cancer.

Buy L-selenomethionine today and benefit from its superior bioavailability.

In this form - the most abundant in food – selenium is rapidly and completely absorbed by the gastro-intestinal system.
Directions for use
Take one tablet a day with food.
No reviews for this product yet