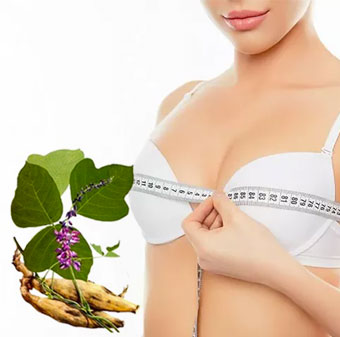 Pueraria Mirifica is a rejuvenating dietary supplement extracted from the plant of the same name. Its naturally high content of specific phytoestrogens makes it useful for reducing the effects of menopause and increasing breast size. But scientific studies show it offers many more benefits for overall health.

What is Pueraria Mirifica?

Also known as “kwao krua,” Pueraria Mirifica is a plant indigenous to Thailand. The benefits of kwao krua are largely attributed to its exceptionally high content of phytoestrogens, which are natural molecules that are able to mimic the action of estrogen sex hormones.

More specifically, oestradiol is responsible for:

Oestriol is similar to Miroestrol, which is the phytoestrogen with the most significant estrogenic activity. Oestriol is also considered to be the safest for men, which makes Pueraria Mirifica for men a possibility.

However, note that kwao krua should not be confused with Kudzu (Pueraria hirsuta), which has different properties and uses.

In their comprehensive guide, "Pueraria Mirifica: benefits of the wonder herb,” Drs Richard Passwater and Margaret Ritchie describe in detail the scientifically-validated properties of this plant. From relieving menopause symptoms to increasing sex drive, this vital supplement has numerous benefits.

After menopause, estradiol levels fall dramatically, and while there’s considerable variation between individuals, this can lead to some very unpleasant symptoms. Some women are fortunate enough to avoid these symptoms altogether, but for others, they’re a significant hindrance to their daily lives.

And while the symptoms tend to subside over time, a quarter of all women will still be affected a decade from their last period. Symptoms include hot flashes, night sweats, headaches, chronic fatigue, sleep problems, vaginal dryness, urinary problems — urgent need to pass water and cystitis — and joint pain.

And more women, keen to avoid the highly controversial route of hormone replacement therapy, are turning to phytoestrogen supplements to compensate for the sudden loss of estrogen and to ease its accompanying symptoms. In this regard, supplements should only be taken while symptoms continue.

Low libido is common from time to time, but shouldn’t be an ongoing concern. If it is, there might be an underlying condition that is causing it. Several issues can lead to low libido, including an imbalance of hormones, certain prescription medications, depression, chronic illness, aging, stress and alcohol abuse.

During menopause, the libido is also affected. Testosterone and estrogen levels decrease, making it more difficult to become aroused. The lack of estrogen can also cause vaginal dryness. Additionally, the vaginal wall can become thin — known as vaginal atrophy — which can cause discomfort during intercourse.

Menopause brings other physical changes that can affect libido. If you are struggling with hot flashes or night sweats, you may not be getting enough sleep, and therefore be too tired to have sex.

Some people turn to exercise to maintain their breasts’ shape. With the right regimen, the muscles underneath the breast tissue can be revitalized. However, exercise is good for your overall health, without the right balance of hormones, it becomes difficult to rejuvenate the breast tissue completely.

Pueraria Mirifica contains phytoestrogens, which studies indicate may make breasts bigger, firmer and rounder. It might even reduce some stretch marks found on the breasts from weight loss or gain — especially following pregnancy. Combine kwao krua with a daily exercise routine targeting the chest to ensure healthier and stronger breasts.

According to the Mayo Clinic, menopause can occur anytime in the 40s or 50s, but the average age is around 51. Menopause is diagnosed once a woman goes a full year without a menstrual period.

This natural process brings many symptoms with it, some of which can be quite uncomfortable. Leading up to this change, some women experience signs of menopause, including:

Each woman experiences different symptoms, and they may include skipping periods before they totally stop. It’s possible to have a menstrual period one month and then skip a few in a row. Sometimes, the monthly cycle even returns to normal after stopping for a while.

Additionally, some women experience shorter cycles that cause their periods to increase in frequency. Despite this irregular ovulation, it’s still possible to get pregnant. If you are skipping periods, you might want to take a pregnancy test to ensure that menopause is the cause.

Pueraria Mirifica produces estrogen-like effects, so you could experience the following side effects:

With that said, there have been very few adverse side effects documented. It’s also considered to be a safer alternative to conventional hormonal therapy. In comparison, these hormone therapies have known side effects, some of which are quite serious. Studies have shown there’s an increased chance of blood clots, cancer, stroke and heart attacks from undergoing hormonal therapy.

In comparison, a 2016 study showed that a solution with 0.3% Pueraria Mirifica could significantly increase the chance of endometrial and breast cancer with female rats when taken for 36 weeks. For this reason, it’s always best to speak with a healthcare professional before taking any supplements.

Additionally, pregnant and breastfeeding moms should never take Pueraria Mirifica because of the estrogen-like effect. It’s also not recommended for women that suffer from estrogen-sensitive conditions, such as uterine fibroids, endometriosis, ovarian cancer and breast cancer.

People with liver disease should also monitor their Pueraria Mirifica usage closely. The herbal metabolites are broken down by the liver and taking too much could lead to damage over time.

Some of the phytoestrogens in kwao krua, such as daidzein, may be converted into more active molecules when they come into contact with gut flora. However, this conversion depends on the composition of this microflora and appears to be more effective in vegetarians.

At this time, it’s unclear whether Pueraria Mirifica interacts with other drugs.

We recommend that you take two pills, or capsules, a day. Each capsule contains 250mg of 20:1 extract of the root and stem of Pueraria Mirifica.

To boost its effects against menopause symptoms, it can be combined with other supplements available to buy at Supersmart, such as the natural liposomal progesterone cream, (extracted from wild yam) while symptoms persist. It can also be combined with the bone-strengthening supplement Bone Health to reduce bone loss or with the aphrodisiac Damiana extract to add extra spice to your sex life.